SALT LAKE CITY — The University of Utah is interested in a future expansion to Rice Eccles Stadium that would boost seating capacity by 10,000 and would create new locker rooms and booster areas for Ute football, a school administrator confirmed Tuesday.

The potential expansion - which the administrator underscored was in a "conceptual phase" with no time table established - could displace much of the neighboring Olympic Cauldron Park.

"In light of our Pac-12 move, there has been interest in the potential of expanding the stadium," said Mike Perez, associate vice president for facilities management.

Perez said the school had already conducted some feasibility analysis on a stadium expansion and — depending on the plan — the cost could range from $40 million to $60 million.

In addition to competing in the Pac-12, Perez said an additional motivating factor to improve the site was the Clark Building, which comprises the south end of the stadium along with bleachers, was in disrepair.

The project would include new locker rooms and an upgraded area for the Crimson Club, Perez said. The stadium would likely be completed into a bowl shape, with an upper concourse connecting the existing stadium to the expansion. Seating capacity would increase by at least 10,000 and would likely include additional loge and club seats. 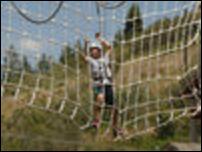 When the curtains close on the Summer Olympic Games this Sunday, London will be faced with the same challenge of every host city: what to do with the venues.

"It'll be driven primarily by the athletic department as it regards continuing success with the football program obviously," Perez said. "There are no plans as of yet as to when that would occur, but it is an opportunity that we're aware of."

Talk of a Rice Eccles expansion appears to be heating up recently.

The plans would likely impact the Olympic Cauldron Park, which borders the stadium at the south end. Former Salt Lake Organizing Committee chief operating officer Fraser Bullock said he had been contacted only within the past few months about the future of the park.

"We had a very good, collaborative conversation and I understand that things change over time," Bullock said.

The park, Bullock and Perez said, was never intended to be a permanent feature. An agreement is currently in place to keep the Olympic Cauldron Park in place until 2015.

"So that term is just about here and with that we're looking at those opportunities for expansion," Perez said.

Bullock said Hoberman arch and a number of photos and mementos from the games would likely be housed at the Utah Olympic Park in Park City in the future. He said officials were looking for a suitable site for Hoberman Arch, but acknowledged it may end up in Park City as well.

Perez said there was interest in incorporating the Olympic Cauldron and other features into the expansion design, though it was unclear how.