TACOMA, Wash — First, attorneys for Steven Powell notified a Washington court of their intent to appeal their client's conviction.

Now, prosecutors have filed notice of their own appeal.

Powell, 62, was sentenced to 30 months in prison for 12 counts of voyeurism. He is appealing his conviction on the grounds that the police search of his home that led to the discovery of thousands of images of two neighbor girls, young women around the Seattle-Tacoma area, and Susan Powell, was unconstitutional.

In addition, the two young girls who were the basis of Powell's voyeurism convictions have filed a civil lawsuit against him.

Now, the Pierce County Prosecutor's Office has filed notice that they plan to cross appeal.

It's unclear, however, whether the appeals — which often take months or years to go through the system — will make any difference in how much time Powell serves since he's scheduled to be released next May. 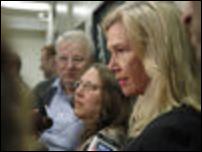 Victims of Powell's voyeurism file suit against him

Calling his actions "outrageous," "heinous," "disgusting" and "egregious," the attorney representing two young Washington girls followed through on her promise Wednesday to file a civil lawsuit against Steven Powell.

While considering pre-trial issues in May, Pierce County Superior Court Judge Ronald Culpepper dismissed a charge of possession of child pornography against Powell.

Prosecutor Mark Lindquist said while his office is not appealing Powell's sentence, they are appealing the decision to dismiss that charge. Just because prosecutors won at trial doesn't mean they agree that every ruling during the case was correct, he said.

While Lindquist didn't say what those specific issues are, they could include:

• The removal of missing Utah mother Susan Powell from the trial. In several pre-trial rulings, Culpepper all but removed any mention of her. Prosecutors had wanted to present evidence that Steven Powell had taken voyeuristic pictures of his missing daughter-in-law and also recorded sexually explicit fantasies he had of her in his diaries.

• The dismissal of two charges at sentencing. The jury convicted Powell of 14 counts of voyeurism. But during the sentencing hearing, the judge dismissed two of those counts and sentenced Powell on 12 counts.

Lindquist said the appeals process could take an estimated one to two years to complete. Yet Powell is scheduled to be released from prison in less than a year.

Powell will be released on May 23, 2013 — 338 days from the time the sentence went into effect on June 19, Washington Department of Corrections spokeswoman Selena Davis said. His original sentence amounted to 913 days. With a reduction of 135 days for good behavior in jail, another reduction of 169 days because Powell's offense was non-violent and the credit for the time he had already served, the sentence is actually 338 days.

Susan Powell went missing from her West Valley home 2 ½ years ago. Her husband, Josh Powell, was suspected in her disappearance. He murdered their two young sons before committing suicide in an inferno at his Washington home in February.

Susan Powell's parents, Chuck and Judy Cox, believe Steven Powell has information about what happened to their daughter.