Strategists: Romney needs to 'own his Mormonism'

SALT LAKE CITY — Key Republican operatives are now saying Mitt Romney should play up his Mormon faith as he moves forward on the campaign trail.

Republican strategists tell Politico they believe if Romney publicly embraces his Mormonism, it will help his campaign in the long run.

So far, most GOP evangelical Christians have been wary of Romney's faith and initially supported other candidates. And, Romney has avoided discussing religion while campaigning.

However, Politico says, "Many Republicans think that the standoffish candidate actually needs to embrace his Mormonism publicly to open a window into his life." 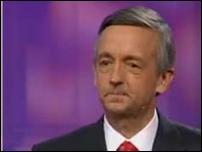 One former supporter of Rick Santorum now plans to back Romney because she says any candidate would be better than Pres. Barack Obama. Penny Young Nance, president of the advocacy group Concerned Women of America, told Politico, "His (Romney's) religion isn't the issue - he's the issue. At some point you need to be honest about who you are."

She feels if voters could see more of the part religion plays in Romney's life, they would better understand him and his faith.

Sources in the Romney camp told Politico there is no current plan to do an in-depth interview on Romney's LDS faith like their candidate did in 2007 with the late Mike Wallace on "60 Minutes." Still, they say that kind of interview is frequently a part of internal discussions.

Questions still remain about evangelicals and how Romney's Mormon faith ultimately will play with them. A number of prominent Evangelicals have been lining up behind Romney, but for others his faith is still a point of contention. Romney adviser Mark DeMoss says he believes evangelicals are softening as they see they can support someone with their values, just not their exact religious beliefs.

Politico notes that "If there was ever a time for Romney to publicly reveal his inner Mormon, this is it," due to the so-called "Mormon moment" being experienced in the U.S.