Spanish Fork Police Chief Dee Rosenbaum was decertified for four years after a police standards review committee determined he shoplifted clothing at the Provo Towne Center in 2010 and then lied about it to investigators.

Rosenbaum has been chief of the department for 25 years.

Grantsville Police Chief Danny Johnson was decertified for 18 months for his conviction of wanton destruction of wildlife.

The actions came during the Peace Officer Standards and Training Council meeting in St. George. The two police chiefs were among 11 current or former POST-certified law enforcers who faced disciplinary action from the council based on POST recommendations.

Rosenbaum was accused of attempting to shoplift at the Provo Dillard's store on June 5, 2010. He brought two bags into the store with him, including a used Dillard's bag, and put three pairs of pants inside.

Store surveillance video showed that Rosenbaum appeared to be looking around the store before placing clothing in the bag as if he were surveying the scene. The police chief never left the store, as he was stopped and questioned by a security guard.

The video and subsequent statements Rosenbaum made convinced an administrative law judge that Rosenbaum committed theft, a POST report states.

"Throughout the nearly 15 minutes of surveillance video, Mr. Rosenbaum constantly looks up and around, to his left and his right in a strongly perceived attempt to see if he is being watched. The video shows Mr. Rosenbaum often picking up or handling items of clothing without ever even looking at the clothing items he is handling," the report states.

A report from the Provo Police Department, however, said there was "not clear-cut evidence of an intent" to steal clothes from the store. The Provo City prosecutor reviewed the case but declined to file any criminal charges.

If because of my poor judgment and my stupidity I deserve to be reprimanded, I can understand that. I should not lose my certification and my career.

But six months later, Rosenbaum was summoned for an interview with POST authorities and in January was called before a POST hearing, where he was accused of lying to an investigator.

At Thursday's hearing, Rosenbaum told the council he did not steal or lie and said the incident was nothing more than a case of poor judgment.

"If because of my poor judgment and my stupidity I deserve to be reprimanded, I can understand that," he said. "I should not lose my certification and my career."

Rosenbaum — who is retired in place, meaning he is retired but still works as chief and collects a paycheck from the department — said one bag he was carrying was for shopping because Dillard's does not offer a way for shoppers to carry multiple clothing items. The other bag, he said, was for bringing home carry-out food for his family from the food court. He said he didn't realize that the food court provided its own plastic bags for carry-out.

"I never have, nor would I ever, not pay for items at any store," he said.

"I have watched the recording many times. I did look suspicious, and I did use very poor judgment. But I did not and would not shoplift," he said. "All they had to do was wait a little longer and there would not have been any question of my intent."

As for allegedly lying to investigators, he said segments of his comments in different interviews were "taken out of context and mischaracterized." And he added that he might not have been as thorough with his answers in each interview.

"I had no agenda. I just tried to answer the questions and explain what I was doing the best I could," he said.

The Spanish Fork city attorney and mayor were present at the hearing to support the chief. Rosenbaum also asked for a continuance of his hearing because his own private attorney was not able to attend. 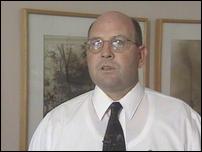 But the request was denied. "He should have been here," one POST official said, adding that the attorney knew about the hearing.

Perrins had no comment on the POST council's decision, saying the Spanish Fork City Council would be meeting next week to determine its next move.

Before the vote, some council members commented that it was a troubling case for them. They were particularly troubled by the video of Rosenbaum seemingly looking around the store and the fact that he pulled out his cell phone and held it to his ear for about 30 seconds as security approached.

As they walked up to him, the security officers reported that they heard Rosenbaum say either, "I will meet you later" or "I will see you in the car."

The problem was that investigators determined that no call had been made or received at that time. Rosenbaum told the council he thought he had felt his phone vibrate, and as Dillard's security approached, he wasn't sure if someone was on the other end or not so he just said, "I'll get back with you later."

The council vote on Rosenbaum was unanimous with two people abstaining because of personal ties to the chief.

Rosenbaum has been employed by the Spanish Fork Police Department for 33 years, about 25 of those years as chief of police, according to a POST report.

In an unrelated case, POST recommended that Johnson, the Grantsville police chief, be decertified for three years. The council approved an alternate motion, on a mixed vote, to reduce his penalty to 18 months.

There are too many imaginary lines out there. I don't even understand wildlife laws. I'll never hunt again." -Danny Johnson

Johnson was charged in 4th District Court in Heber City with wanton destruction of wildlife, a class A misdemeanor. He pleaded guilty as part of a plea in abeyance and the charge was later dismissed.

As opposed to Rosenbaum's slow and calm speech to the POST council Thursday, Johnson was more excited and animated as he tried to explain that he had just wanted to share a father-son hunting experience.

"I'm not a hunter no more. To be honest with you, I thought I was obeying the law," he said. "I honestly at the time did not think it was wrong ... I'll swear on a stack of Bibles, when I tagged that deer, I didn't think it was a big deal."

Questions were also raised about why Johnson tagged the deer that his son shot and about a confrontation he had with a forest service officer.

At one point during his comments to POST, Johnson expressed frustration with the state rules and regulations for deer hunting.

As a final plea, Johnson said he realized he made a mistake and he pleaded guilty in court to try and make it right. "I would never intentionally break the law," he said.

The police chief for Grantsville has been convicted of poaching.

Johnson's attorney also argued to the council that the possible three-year decertification did not match the severity of the offense.

Grantsville's mayor submitted two letters to the council in support of the chief.

The council, however, was mixed on whether to hand down the recommended three-year decertification or an 18-month punishment. Some felt there were aggravating circumstances in the case and others believed it was an accident and misunderstanding.

Other law enforcers on Thursday were disciplined for offenses ranging from DUI to domestic violence. A Salt Lake police officer who has since resigned from the department had his certification suspended for two years after showing up to a crime scene with a blood-alcohol content of .16, nearly twice the legal limit.

The officer was at home and on-call at the time, when he was called out to a shooting in downtown Salt Lake City and drove his patrol vehicle to the scene.