SALT LAKE CITY -- African-American Latter-day Saints are remembering an important anniversary in their faith and honoring the memory of pioneer Jane Manning James with an up-coming play about her life.

Who is... Jane Manning James?

Jane Manning James was an early convert to the LDS Church and the first African American woman to come to the Utah Territory as a Mormon pioneer. She converted to Mormonism in Connecticut and traveled hundreds of miles to Nauvoo, Illinois to be with other church members. She was taken in by and worked for the prophet Joseph Smith and his family. She and her husband arrived in Utah in 1848; they had eight children.

Jane was an early African-American member of The Church of Jesus Christ of Latter-day Saints. She lived with Joseph and Emma Smith in Nauvoo and traveled to the Salt Lake Valley, suffering prejudices with courage. The play "I Am Jane" honors her legacy.

"Because she did it under those circumstances, I can do it, and my children will be able to do it," says Tamu Smith, who plays the part of Jane in the play. "I think that it would be very difficult to be the first, but I'm very glad that she was."

Throughout her life, Jane petitioned Church leaders to receive temple sealing ordinances but was denied. 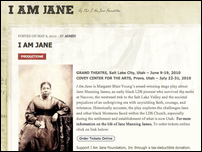 Curtain goes up on story of black Mormon pioneer

The life story of a black Mormon pioneer so inspired Keith N. Hamilton that he began saving his money...

"Her story resonated with me as a person of faith, one who endured many trials, yet was so forgiving and so committed to what she believed in," says Keith Hamilton, the play's executive producer.

One of her descendants believes Jane knows of the 1978 revelation extending the priesthood to include black men.

"I think Jane would not only be happy, she would praise it herself. She would say, ‘It is a blessing come true!'" Louis Duffy says. "While her physical being, of course, is gone, her spirit is well. Her spirit is here."

Show times and locations
"I am Jane"

On the back of Jane's grave marker is the depiction of a famous story in her life, an act of charity in desperate times. It shows Jane sharing half of her flour with Eliza Partridge Lyman, which helped that family survive.

"I think it's a legacy, not just to these two families, but to the human race; and that's why it needs to be told," Bybee says.