(Photo: AP file) LOGAN -- The Utah State Aggies (8-4) used a high-powered offensive performance and stifling defense to blow-out the Cal State Fullerton Titans (4-5) Tuesday at Spectrum on day two of the Basketball Travelers Invitational, 83-60. At one point during the first half of play the Ags were making 70 percent or more of their field goals and 3-point attempts.

"We played really solid, first thing we had to go and take care of the defensive end. You know last night we didn't have a great defensive game like we wanted to. Once we start to play defense everything starts to flow for us. The guys are starting to realize that," said Williams who also tied his career-high of six assists. Sophomore forward Chin Orane led the Titans with 15 points on the night and reserve guard Eric Williams, who was the only other Titan to score in double-digits, scored 10 points off the bench. The Aggies held the Titans to 35.8 percent shooting from the field and 36.8 percent from the 3-point line. Titans starting point guard sophomore Jacques Streeter, who scored 21 points against Weber State Monday and who was a point of concern for Coach Morrill, was held scoreless.

"Obviously, we got way behind at the start playing a zone defense," said Cal State Fullerton Head Coach Bob Burton. "We went to a man-to-man and played them even the rest of the way."

"For whatever reason they (Fullerton) decided to come out and zone us. We've always told our teams that people can't zone us - that's the way we want our teams to feel and we want our shooters to free up and get the ball and get the ball inside as much as we can," said Morrill. Aggie junior guard Brian Green gave the Aggies a 27-7 lead mid-way through the first half on a deep 3-point shot from the left wing and the Aggies held a 14-point lead heading into the locker room.

"You always hope that you have a little killer instinct - we've had some second half lapses. What we talked about at halftime was not having the second half defensive lapses that we've had the last few games," said Coach Morrill, "And that was the most encouraging - we held them way down in field goal percentage and played good second half D."

Not only did the Aggies play good second half defense, they were able to fend off any attempts by Fullerton to significantly cut the lead. Williams hit a sweeping and-one layup with 7:35 remaining in regulation and the Aggies held a 20-plus point lead the remainder of the game. 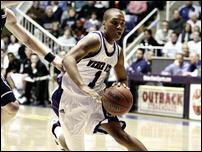 None of the Aggies played more than 30 minutes and only two Aggies saw less than ten minutes. Every Aggie scored with the exception of true freshman forward Tyrone White. Brady Jardine tied his career- high of seven points. "We got to get a lot of rest so we'll be energetic for tomorrow," said Williams.

Coach Morrill hopes that Williams is right because energy and excitement may be a key to winning Wednesdays' game against in-state rival Weber State and former Aggie Assistant Coach Randy Rahe.

"It test's your resiliency a little bit, it tests your character a little bit to play three nights in a row. You're gonna be tired, but you gotta play through being tired. You gotta be excited to play basketball, said Coach Morrill. "I think energy is the biggest thing probably for both teams tomorrow night. Who has the energy and the excitement to play."

Tip-off against Weber State is set for 8 p.m. as the Aggies conclude the Basketball Travelers Invitational sponsored by Gossner Foods Wednesday at the Spectrum.