One and done; Jazz can't put two together on road

ATLANTA -- After accumulating a small four-point lead at the end of the first quarter, the Atlanta Hawks decided to stop messing around and get the job done.

The four-point lead turned into a 10-point advantage over the Jazz by the half, and from there it was all over.

Going up by as much as 32 in the third quarter, the Hawks controlled the game with a commanding floor presence and came away with a comfortable 96-83 win.

If the Hawks' intention at the beginning of the game Friday was to teach Utah how to claim wins over teams they should beat, they can rest soundly knowing they did their job. 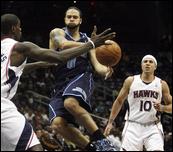 Josh Smith scored 16 points, Marvin Williams added 15 and the Atlanta Hawks won their sixth straight game with a 96-83 victory over the Utah Jazz on Friday night.

With quarter scores of 18, 16, 17, and 32, the Jazz put the finger on what might be their two biggest obstacles when playing on the road - scoring and turnovers.

Utah struggled to get the offense rolling from the beginning of the game and had a hard time getting around Atlanta's defense. Carlos Boozer was held to just four points in the first half, with Deron Williams following in tow with only two heading into the break. No one on the Jazz scored more than six by halftime.

"(The Hawks) were terrific defensively, we had a tough time trying to adjust to what they were doing," said head coach Jerry Sloan. "They switched a lot on us, we reacted very poorly and turned the ball over and played right in their hands."

Had Utah not racked up 13 turnovers in the first half, they might have had a better chance at decreasing their 10-point halftime deficit. Unable to take care of the ball any better in the second half, the Jazz ended with 23 giveaways on the night.

Boozer managed to stop his turnovers at four, but Williams added two more before being taken out to end the night with four as well.

After ending the third quarter down 30, the Jazz managed to improve their score and cut their deficit to 13 by taking out all their starters and playing their bench, but couldn't come close enough to have a chance at preventing Atlanta from bumping their winning streak to six.

Wesley Matthews was the only starter for the Jazz to see double-digit scoring, and ended with 11. Andrei Kirilenko and Eric Maynor added double-figures off the bench for 13 and 11, respectively.

"Now that it's over, you have to try and forget about it and get ready to play tomorrow," Sloan said. "That's when you find out what you're made out of is after a game like this (when) you get waxed all the way from start to finish; find out how bad you wanna play tomorrow."

The Jazz will try to rebound from their seventh road loss of the season Saturday against the Charlotte Bobcats.