SALT LAKE CITY -- For some people who stood in line to see Sarah Palin, meeting the former Alaskan governor was like looking in the mirror.

Leslie Heath from Highland started getting calls from family members as soon as Sarah Palin was featured in the national spotlight saying she looked a lot like Palin. She says she doesn't dress up to look like Palin and she's had her look, including the glasses, for the past 10 years.

When I was sitting reading [Palin's book] this morning, I looked down at the cover and thought, ‘Oh no, I wore a red sweater,' but I didn't dress up to look like her," said Heath. 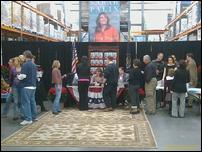 Palin in Utah for book signing

The former Alaska governor and vice presidential candidate is signing copies of her book, "Going Rogue" at the Costco at 1818 S. 300 West between noon and 3 p.m.

Standing in line not far from Heath was Chris Kimball from Bountiful. She too looks a lot like Palin. She even caused a stir among some when she came into the store.

Several people even asked to have their picture taken with Kimball.

Both women say the reason they wanted to meet Palin has nothing to do with their similar appearances, but rather they admire Palin as a leader and for her values and political views.