SALT LAKE CITY -- An animal rights group made some strong allegations Wednesday against the University of Utah.

People for the Ethical Treatment of Animals (PETA) said someone from its organization went undercover for eight months working for medical labs on campus. That person videotaped what PETA called cruel and illegal treatment of lab animals.

"Miserable conditions and suffering seem to be, at the university, business as usual," said Kathy Guillermo, vice president of lab investigations for PETA. 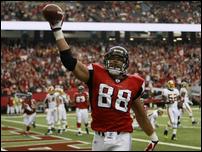 A Falcons player gets on the good side of PETA

Providing quite a contrast to Michael Vick's gruesome dogfighting operation, Atlanta Falcon's tight end Tony Gonzalez and his wife posed in the nude for an anti-fur ad from PETA.

For eight months, PETA says it had a spy on the inside -- someone working for both its organization and as a caregiver for laboratory animals at two University of Utah research labs. The organization says the undercover employee used a hidden camera to video tape cruelty to animals, as well as federal and state law violations.

"Instead of rewarding them with a treat - something sugary or something that may or may not motivate them - water," the lab worker says. "If you are deprived of water, you're always going to be motivated for water."

PETA also says it documented dead and sick lab mice left in cages for a week, and mice with tumors larger than is federally mandated.

The two labs in question are the Moran Eye Center and the Comparative Medicine Lab.

"We've asked the federal agencies to investigate the laboratory to find out if our allegations are correct; and if they are, to cite and fine the laboratory," Guillermo said.

But the vice president of research for the University of Utah told KSL News the allegations are completely untrue, and recorded dishonestly by an employee they trusted.

"It's all taken out of context. It's implied that if you see something that looks bad, it must be bad. No one at the lab must have been aware or cared about it," Vice President Tom Parks said.

Parks said the undercover PETA employee worked for the university during a time period when they passed an unannounced federal investigation with flying colors.

"She spent eight months looking for the worst that she could find, and it's heavily edited and has now turned that into an accusation that we're rampantly mistreating animals -- and it's not true," Parks said.

Parks admitted there were sometimes mistakes made. But he said there is not a pattern of problems and believes experimentation is necessary.

"There would be no antibiotics, no vaccines, no transplants, none of the modern medical miracles that keep many of us alive. And no new ones would be developed in the future," Parks said.

PETA is also upset the university purchases animals from several area shelters for experimentation, but that is not against Utah law.

The university says it will carefully investigate every allegation and look into any wrongdoing. PETA has also submitted complaints to federal investigators who will conduct an investigation.