Utes hope to rebound from loss for homecoming game

SALT LAKE CITY -- The Utes will be looking to rebound this weekend against Louisville (1-1) after losing to Oregon over the weekend, their first loss since 2007.

Head coach Kyle Whittingham said his team didn't play well "in any phase" on Saturday, especially on offense where his team had 10 3-and-outs. The Utes (2-1) were also just 5 for 18 on third down conversions and 0 for 2 on 4th down tries.

The loss knocked Utah out of the rankings for the first time in more than a year and snapped the nation's longest active win streak at 16 games. 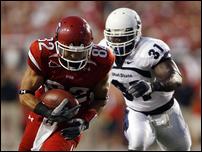 Against the Ducks, Utah quarterback Terrence Cain threw for 178 yards but also had two interceptions. When asked about Cain's performance, Whittingham said he's a tough kid and resilient, and added Cain is "still our guy" and there is no quarterback controversy.

Whittingham is concerned about his defense, saying his team's inability to contain the run is his biggest issue. The Ducks rushed for 217 yards.

Looking ahead to Louisville, Utah's homecoming opponent this weekend, Whittingham said the Cardinals are similar to Oregon and this game will be a test to see how his team overcomes adversity. Despite the loss, Whittingham added that this is "not time to panic, that's for certain."

Utah's runningback Matt Asiata, who rushed for just 54 yards against Oregon is expected to be close to 100 percent this week. Asiata didn't practice last week because of a shoulder injury. Running back Sausan Shakerin, who didn't make the trip to Oregon because of wrist and shoulder issues, most likely will not play this week either.

Utah is 3-0 all-time against Louisville. Saturday's contest set for 5:30 at Rice Eccles Stadium.