WEST JORDAN — Family friends are sharing a sad update on a crash in Big Cottonwood Canyon that killed a West Jordan mother. Those who know Jessica Keetch Minnesota said she was expecting the family's third child when she died.

Minnesota's husband and two young children must now learn to navigate life without her. The whole situation has left the family's entire neighborhood devastated.

"It's devastating, and not just because of the situation and how it happened, but because it's so close to home," said Cassidy Rosenthal, a neighbor and good friend of Jessica and Jared Minnesota. "And because she did so much good, and she was so kind, and so loving."

Rosenthal described Jessica Keetch Minnesota as always helping and serving the people around her, whether it be at work, church, the neighborhood, friends, or family. She worked as a speech pathologist, and Rosenthal said she was passionate about her work, both at University of Utah Health and Jordan Valley Hospital.

She also loved the outdoors.

She was on her way up Big Cottonwood Canyon to go hiking with her children and mother, who Rosenthal said was visiting from out of state when her car was hit by a dump truck going down the canyon.

Unified police said the dump truck driver told them the brakes went out and he was trying to use a hillside as a runaway truck ramp when he crossed the line. 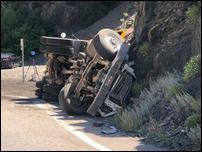 Woman killed, 4 others injured in crash with dump truck in Big Cottonwood Canyon

A woman was killed and four other people were seriously injured Monday in a crash on Big Cottonwood Canyon.

Jessica Keetch Minnesota's family and friends received the worst news, just the very next day after feeling elated over the best news.

"They had just announced to their family that they were expecting," Rosenthal said. "They'd had a rough year and had two miscarriages over the last few months. And this one was doing very well, very strong, and she made it to 12 weeks."

The Minnesota family had just told everyone Sunday that Jessica, after two miscarriages, was expecting-- and everything looked great! The next day, she died when a dump truck driver told police his brakes stopped working in Big Cottonwood Canyon. @KSL5TVpic.twitter.com/XLv2HjQgtJ

Twenty-four hours later, the family was left processing two losses while worrying over both children and their grandmother.

In their grief, neighbors are doing their best to prop up the Minnesota family.

Monday evening, dozens gathered to tie ribbons to trees and posts down the family's street.

She expressed wanting to show Jared Minnesota as much love and support as they could, just like Jessica Keetch Minnesota used to do for everyone else.

"It definitely is a blessing knowing that she didn't suffer," Rosenthal said, adding, "but that family is going to be left to suffer for a long time."

*Disclaimer: KSL.com has not verified the accuracy of the information provided with respect to the account nor does KSL.com assure that the monies deposited will be applied for the benefit of the persons named as beneficiaries. If you are considering a deposit or donation you should consult your own advisers and otherwise proceed at your own risk.