A house sits in Rock Creek after floodwaters washed away a road and a bridge in Red Lodge, Mont., on June 15. As cleanup from historic floods at Yellowstone National Park grinds on, climate experts and meteorologists say the gap between the destruction in the area and what was forecast underscores a troublesome trend tied to climate change. (David Goldman, Associated Press)

By nightfall, after several inches of rain fell on a deep spring snowpack, there were record-shattering floods.

Torrents of water poured off the mountains. Swollen rivers carrying boulders and trees smashed through Montana towns over the next several days. The flooding swept away houses, wiped out bridges and forced the evacuation of more than 10,000 tourists, park employees and residents near the park.

As a cleanup expected to last months grinds on, climate experts and meteorologists say the gap between the destruction and what was forecast underscores a troublesome aspect of climate change: Models used to predict storm impacts do not always keep up with increasingly devastating rainstorms, hurricanes, heat waves and other events.

"Those rivers had never reached those levels. We literally were flying blind not even knowing what the impacts would be," said Arin Peters, a senior hydrologist with the National Weather Service.

Hydrologic models used to predict flooding are based on long-term, historical records. But they do not reflect changes to the climate that emerged over the past decade, said meteorologist and Weather Underground founder Jeff Masters.

"Those models are going to be inadequate to deal with a new climate," Masters said.

Another extreme weather event where the models came up short was Hurricane Ida, which slammed Louisiana last summer and then stalled over the Eastern Seaboard — deluging parts of Pennsylvania, New Jersey and New York with unprecedented rainfall that caused massive flooding.

The weather service had warned of a "serious situation" that could turn "catastrophic," but the predicted of 3 to 6 inches of rain for New York, New Jersey and Pennsylvania was far short of the 9 to 10 inches that fell.

The deadly June 2021 heat wave that scorched the Pacific Northwest offered another example. Warmer weather had been expected, but not temperatures of up to 116 degrees that toppled previous records and killed an estimated 600 or more people in Oregon, Washington and western Canada.

The surprise Yellowstone floods prompted a nighttime scramble to close off roads and bridges getting swept away by the water, plus rushed evacuations that missed some people. No one died, somewhat miraculously, as more than 400 homes were damaged or destroyed.

As rock slides caused by the rainfall started happening in Yellowstone, park rangers closed a heavily-used road between the town of Gardiner and the park headquarters in Mammoth Hot Springs, Wyoming. It later washed out in numerous places.

The rain and snowmelt was "too much too fast and you just try to stay out of the way," Yellowstone Deputy Chief Ranger Tim Townsend said.

If the road hadn't been closed, "we probably would have had fatalities, unquestionably" park Superintendent Cam Sholly said.

"The road looks totally fine and then it's like an 80-foot drop right into the river," Sholly said. 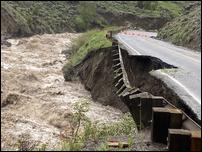 Aerial video posted on the park's Facebook page June 13 shows a large section of paved road next to a river near the north entrance eroded and washed out in several places due to high water levels.

Within a matter of hours on June 12, Rock Creek, which runs through the city of Red Lodge and normally is placid and sometimes just ankle deep, became a raging river. When the weather service issued a flood warning for the creek, the water already had surged over its banks and begun to knock down bridges.

By the time the warning was sent, "we already knew it was too late," said Scott Williams, a commissioner for Carbon County, Montana, which borders Yellowstone.

Red Lodge resident Pam Smith was alerted to the floods by something knocking around in her basement before dawn. It was her clothes dryer, floating in water pouring through the windows.

In a scramble to save keepsakes, Smith slipped on the wet kitchen floor and fell, shattering a bone in her arm. She recalled holding back tears as she trudged through floodwaters with her partner and 15-year-old granddaughter to reach their pickup truck and drive to safety.

"I went blank," Smith said. "I was angry and like, 'Why didn't anybody warn us? Why was there no knock on the door? Why didn't the police come around and say there's flooding, you need to get out?'"

I was angry and like, 'Why didn't anybody warn us? Why was there no knock on the door? Why didn't the police come around and say there's flooding, you need to get out?'

Local authorities say sheriff's deputies and others knocked on doors in Red Lodge and a second community that flooded. But they acknowledged not everyone was reached as numerous rivers and streams overflowed, swamping areas never known previously to flood.

While no single weather event can be conclusively tied to climate change, scientists said the Yellowstone flooding was consistent with changes already documented around the park as temperatures warm.

Warming trends mean spring floods will increase in frequency — even as the region suffers from long-term drought that keeps much of the rest of the year dry, she said.

Masters and other experts noted that computer modeling of storms has become more sophisticated and is generally more accurate than ever. But extreme weather by its nature is hard to predict, and as such events happen more frequently there will be many more chances for forecasters to get it wrong.

That has widespread implications for local authorities and emergency officials who rely on weather bulletins to guide their disaster response approaches. If they're not warned, they can't act.

But the National Weather Service also strives to avoid undue alarm and maintain public trust. So if the service's models show only a slim chance of disaster, that information can get left out of the forecast.

Weather service officials said the agency's actions with the Yellowstone flooding will be analyzed to determine if changes are needed. They said early warnings that river levels were rising did help officials prepare and prevent loss of life, even if their advisories failed to predict the severity.

Computer-based forecasting models are regularly updated to account for new meteorological trends due to climate change, Peters said. Even with those refinements, events like the Yellowstone flooding still are considered low-probability and so often won't make it into forecasts based on what the models say is most likely to occur.

"It's really difficult to balance that feeling that you've got that this could get really bad, but the likelihood of it getting really bad is so small," Peters said. He added that the dramatic swing from drought to flood was hard even for meteorologists to reconcile and called it "weather whiplash."

To better communicate the potential for extreme weather, some experts say the weather service needs to change its forecasts to inform the public about low probability hazardous events. That could be accomplished through more detailed daily forecasts or some kind of color-coded system for alerts.

"We've been slow to provide that information," North Carolina State University atmospheric scientist Gary Lackmann said. "You put it on people's radars and they could think about that and it could save lives."