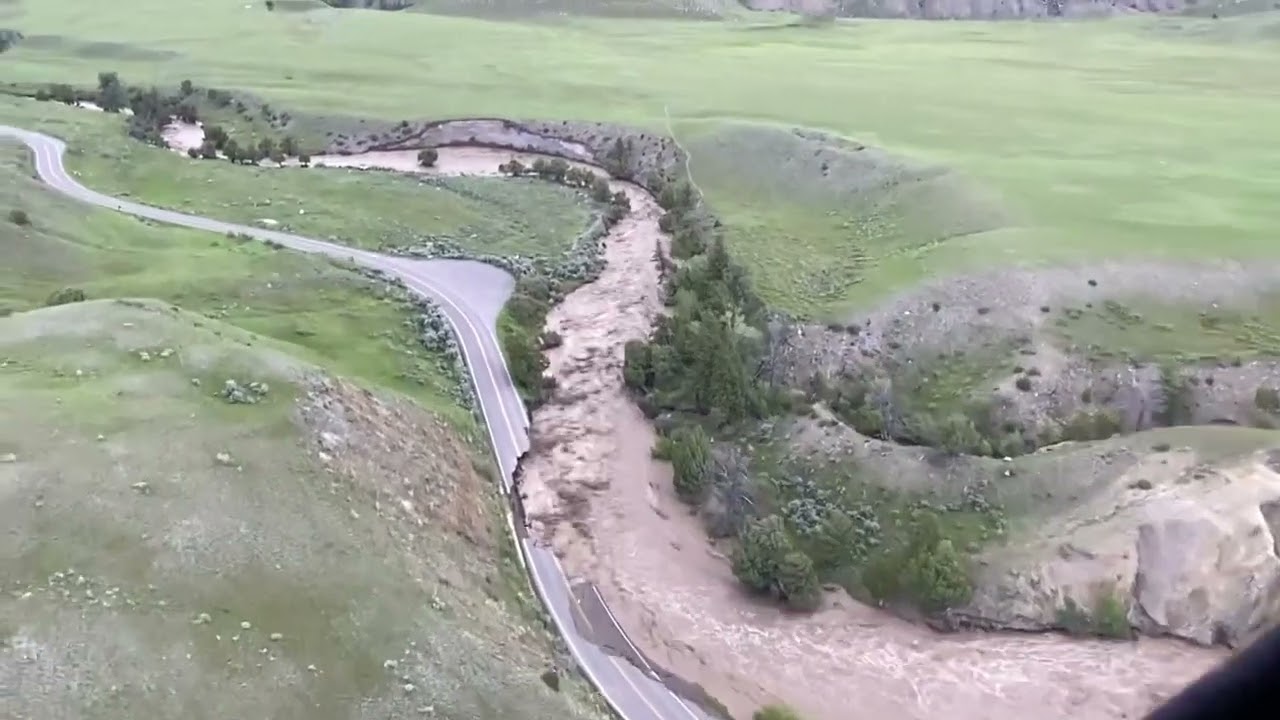 YELLOWSTONE NATIONAL PARK — All entrances to Yellowstone National Park will be closed at least until Thursday due to heavy rain, flooding, rockslides and extremely hazardous conditions.

Aerial video posted on the park's Facebook page Monday shows a large section of paved road next to a river near the north entrance eroded and washed out in several places due to high water levels.

Similar situations have been reported in other parts of the park, and power is out in many areas following "unprecedented" amounts of rainfall and flooding, according to a news release.

"Our first priority has been to evacuate the northern section of the park where we have multiple road and bridge failures, mudslides and other issues," said Yellowstone National Park Superintendent Cam Sholly. "Due to predictions of higher flood levels in areas of the park's southern loop, in addition to concerns with water and wastewater systems, we will begin to move visitors in the southern loop out of the park later today in coordination with our in-park business partners."

The northern loop is likely to be closed "for a substantial amount of time," and park staff is working with the county and state to provide support to residents of Gardiner, Montana, a town north of the park that is isolated by the dangerous conditions.

A family staying at a short-term rental house in Gardiner near the park entrance is unable to leave their rental cabin due to flooding in the area.

Indiana couple Melissa and Parker Manning told CNN they arrived at their rental on Saturday with their family and expected to leave Monday morning.

"That's not happening any time soon," Parker Manning said. "The water levels were high on Saturday, but within the past 10 to 12 hours, things have gotten rougher."

Manning said they did go to the grocery store, and everyone was being smart about what to stock up on and not panicking.

"Our way out of town would be north on 89, but those roads are currently all underwater," Manning said.

The couple has no idea when they will be able to leave the town, but Manning hopes it will be within the next 48 hours.

The host of their rental was very understanding of the situation, Manning added.

Flood levels on the Yellowstone River are "beyond record levels," Yellowstone's website says.

"The river has never been this high before by my house," said Elizabeth Aluck, a resident of Gardiner, which serves as a gateway for visitors. As of Monday afternoon, Aluck said she was unable to evacuate because roads and bridges in the area are washed out.

Yellowstone National Park is renaming one of its largest mountains to honor Native Americans after research showed the peak's original namesake led a massacre that killed at least 173 members of a local tribe.

It's unknown when Yellowstone will reopen, but all entrances will remain closed Tuesday and Wednesday "at a minimum."

The National Weather Service issued a flood warning for the park on Monday and advised campers and hikers to avoid streams and creeks.

"I appreciate the efforts of the Yellowstone team and partners to safely evacuate areas of the park and of our gateway community partners who are helping us through this major event," Sholly said.

The latest road conditions in the park can be found here.

Outdoors & RecIdaho
Nate Eaton
Nate Eaton is the news director and senior reporter at EastIdahoNews.com, a news organization he cofounded in 2015. He also spent several years as a broadcast reporter covering news across the country.