NEW YORK CITY — For the second time in three business days, U.S. financial markets tumbled as speculation and uncertainty about the COVID-19 omicron variant cast a shadow over investors already twitchy about the impacts of rising inflation.

Comments from vaccine makers and the Federal Reserve on Tuesday combined to further roil major stock indexes that saw some recovery Monday after dropping sharply on Friday as news of the omicron variant dominated headlines.

The Dow Jones, NASDAQ and New York Stock Exchange were all down over 1.5% after the close of regular trading on Tuesday.

On Tuesday, Fed Chairman Jerome Powell indicated the schedule to reduce a bond-buyback program that has been a major tool in stimulating the U.S. economy by keeping interest rates at or near zero could be accelerated amid record inflation increases.

Doing so would put the Fed on a path to begin raising its key short-term rate as early as the first half of next year. A higher Fed rate would, in turn, raise borrowing costs for mortgages, credit cards and some business loans.

"The economy is very strong and inflationary pressures are high," Powell said at a Senate Banking Committee hearing. "It is therefore appropriate, in my view, to consider wrapping up the taper of our asset purchases ... perhaps a few months sooner."

The flip side to the Fed's strategy to address inflation is how impacts of the omicron variant may play out, and particularly so if the new strain ends up stoking another wave of health and safety concerns among U.S. workers.

Should that happen, more resignations might then follow at a time when the rate of job quitting is already at record highs, thereby magnifying labor shortages. This would risk weakening the job market and the economy. Under such a scenario, the Fed's dual mandates of stable prices and maximum employment could come into conflict.

Powell hinted at these trends in his testimony before the committee.

"The recent rise in COVID-19 cases and the emergence of the omicron variant pose downside risks to employment and economic activity and increased uncertainty for inflation," he said. "Greater concerns about the virus could reduce people's willingness to work in person, which would slow progress in the labor market and intensify supply-chain disruptions." 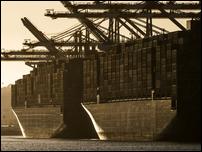 A U.S. Department of Labor report captured what consumers in Utah and across the country have known for some months now — prices on virtually everything have been on the rise.

COVID-19 wrote the first chapter of the global supply chain crisis when Asian factories were slowed or shuttered in the early days of the pandemic. Then, when manufacturing came back online, production output was increased to catch up with the backlog. In the meantime, consumer demand was achieving historically high levels, particularly in the U.S., driven by home isolation and freshly restored household savings rates bolstered by restrictions on travel, recreational opportunities and even dining out.

Adding to the new avalanche of disposable income was the billions pumped into the economy by U.S. federal agencies in the form of checks to individuals and business subsidies. The fresh cash, and time to ruminate about job dissatisfactions, led to another record — the number of people leaving their jobs and staying out of the workforce, creating sweeping labor shortages.

Now, a rising number of international travel restrictions aimed at stemming the spread of omicron are being issued just as the airline industry, and related recreation and hospitality sectors, were feeling newfound optimism and domestic travel volumes over the recent long holiday weekend returned to near pre-pandemic levels. And those same restrictions are also likely to have further negative impacts on supply-chain issues.

"We had been starting to see this glimmer of hope that some of the supply-side constraints were starting to ease," Seema Shah, chief strategist at Principal Global Investors told the Wall Street Journal in a Tuesday report. "If we go back into fear mode, you would be looking at those supply-side bottlenecks being exacerbated."

Market sell-off activity was also sparked Tuesday by comments from Moderna CEO Stephane Bancel who told the Financial Times that he expected current vaccines would struggle with the omicron variant. Moderna, along with Pfizer and Johnson & Johnson, make vaccines against COVID-19 that have collectively helped tame the pandemic through 2021 and allowed the global economy to recover.

Utah has been among the leading states in the country when it comes to economic wherewithal throughout the 21 months since COVID-19 erupted in the U.S. And while residents of the state expressed widespread concern about inflation in recent Deseret News polling, local experts say the state continues to show signs of forward momentum and is on resilient footing should omicron and/or continued inflation exert downward performance pressures.

Dean also noted his concerns about inflationary pressures and said that year-over-year inflation rates, which hit a 30-year high of 6.2% in October, can sometimes reflect outlying anomalies. An index that tends to better represent where inflation is headed, Dean said, comes from the Federal Reserve's own assessment of consumer expectations.

And that data hit an all time high in October.

U.S. household expectations for inflation in the next 12 months came in at 5.7% in October, up from 5.3% reported in September, according to the monthly Survey of Consumer Expectations published on Monday. Median expected inflation over the next three years held steady at 4.2%. Both figures are the highest since the survey began in 2013, according to Bloomberg News.

As the world waits for further information on the potential severity of the omicron variant, and how the new strain could impact other economic challenges like inflation, Dean said Utah is positioned to navigate new challenges better than most.

"We have very strong economic fundamentals in the state of Utah," Dean said. "It's what kept us at a high level throughout the pandemic and is what will help us weather, better than most states, any storm coming our way."