The container ships CMA CGM T. Rooselvelt (MT), left, and CMA CGM Panama (MT) are moored at Maersk APM Terminals Pacific at the Port of Los Angeles on Oct. 19. A U.S. Department of Labor report released Wednesday captured what consumers in Utah and across the country have known for some months now — prices on virtually everything have been on the rise. (Damian Dovarganes, Associated Press)

SALT LAKE CITY — A U.S. Department of Labor report released Wednesday captured what consumers in Utah and across the country have known for some months now — prices on virtually everything have been on the rise.

But the rate of that increase, which marks a 30-year high, may be a bit more of a surprise.

Prices for U.S. consumers jumped 6.2% in October compared with a year earlier, as surging costs for food, gas and housing left families facing the highest inflation rate since 1990. The year-over-year increase in the consumer price index exceeded the 5.4% rise in September, the Labor Department said. From September to October, prices jumped 0.9%.

"More than any other time in many decades, (inflation) has become a kitchen table discussion," Dean said. "People at home are seeing inflation, they're experiencing it and they're worrying about it."

Dean also noted for families with lower incomes, who spend a bigger percentage of their earnings on basic necessities, the rise in prices is a much more difficult burden than for those higher up the income scale.

Even as critical labor shortages continue to help drive up wages as employers compete against each other for a limited number of available workers, inflation is outstripping that new buying power, and the wage increases themselves are exacerbating inflationary impacts.

With Americans in the midst of planning year-end travel, Thanksgiving meals and holiday gifts, the jump in inflation is making those purchases significantly higher than they were last year. 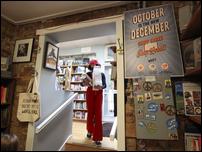 Fueling the spike in prices has been robust consumer demand, which has run into persistent supply shortages from pandemic-related factory shutdowns in China, Vietnam and other overseas manufacturers. Ports are bottlenecked, with a lack of shipping containers magnifying the problem. America's employers, facing worker shortages, have also been handing out sizable pay raises, and many of them have raised prices to offset their higher labor costs.

Jason Fowler, global shipping specialist and president of Utah-based Air and Sea International, said labor shortages are also complicating global supply chain issues that have led to tie-ups at U.S. West Coast ports that are woefully behind in moving consumer goods off of shipping vessels.

"Right now there are 163 vessels in port with 58 at berth," Fowler said during the Gardner discussion Wednesday. "That leaves 105 sitting at anchor."

Fowler explained that in spite of President Joe Biden's edict for West Coast ports to extend operations to 24 hours a day, warehouses that handle container transfers are unable to fill positions to accommodate higher cargo volumes and around-the-clock production. And, landside freight companies are struggling to hire drivers to move those goods out of port and warehouse facilities.

At a Utah Business economic summit Friday in Salt Lake City, Fowler noted new financial penalties for allowing cargo to languish in ports for more than nine days are being implemented for those ships. Collectively, the cargo boats represent about $4 billion in goods, much of which is destined for U.S. retail shelves as the critical holiday shopping season approaches.

The multiplying impacts of supply chain snarls, labor shortages and consumer demand outstripping supplies have been accelerating prices for a broad range of consumer goods, from food, heating oil and patio furniture to paints, chemicals and window blinds. After initially affecting mainly goods in pandemic-disrupted industries, surging inflation has broadened into the many services that Americans spend money on, notably for restaurant meals, rental apartments and medical services, which jumped 0.5% in October.

Miles Hansen, president and CEO of World Trade Center Utah, said Utah companies that rely on exporting their goods are in a scramble to navigate extraordinary challenges.

"A historic number of ships waiting, less ships going back and forth ... creates this unprecedented demand for containers that are available," Hansen said at the Gardner event. "Companies, many here in Utah, are struggling just to get stuff on ships."

Besides finished consumer goods, those stalled cargo carriers are also hauling materials and components that plug into American manufacturing processes.

While automakers have sharply slowed production because of parts shortages, prices for new cars have risen for seven straight months. Higher-priced new cars have been driving more consumers to the used car market, where prices jumped again last month after having eased in August and September. The cost of a used vehicle rose 2.5% from September to October and has soared more than 25% from a year ago.

And, even for those who can swing the cost of a pricey new ride, keeping it on the road is going to cost more.

In the past year, energy costs have jumped a whopping 30%, with gasoline soaring nearly 50%. A gallon of gas, on average, was $3.42 nationwide on Tuesday, according to AAA. That's up from just $2.11 a year ago.

For those wondering when prices may ease, no clear consensus is emerging. 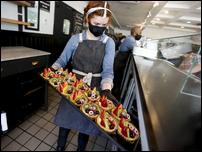 Worries over critical labor shortage challenges have migrated beyond the borders of the business community and are now shared by over two-thirds of Utahns, according to a new survey.

Economists still expect inflation to slow once supply bottlenecks are cleared and Americans shift more of their consumption back to pre-pandemic norms. As COVID-19 fades, consumers should spend more on travel, entertainment and other services and less on goods such as cars, furniture and appliances, which would reduce pressure on supply chains.

But no one knows how long that might take. Higher inflation has persisted much longer than most economists had expected. And inflation is spreading well beyond items like appliances and new and used vehicles that are directly affected by the pandemic.

"The inflation overshoot will likely get worse before it gets better," said Goldman Sachs economists in a research note Sunday.

For months, Federal Reserve Chairman Jerome Powell had described inflation as "transitory," a short-term phenomenon linked to labor and supply shortages resulting from the speed with which the economy rebounded from the pandemic recession. But last week, Powell acknowledged that higher prices could last well into next summer.

The Fed chairman announced that the central bank will start reducing the monthly bond purchases it began last year as an emergency measure to boost the economy. Investors now expect the Fed to raise its benchmark interest rate twice next year from its record-low level near zero — much earlier than they had predicted a few months ago.

Many large companies are passing on the cost of higher pay to their customers, and in some cases, consumers are paying up rather than cutting back.

Fast food prices soared 7.1% in October from a year earlier, the government said Wednesday. That was the largest such increase on record, reflecting higher costs for beef and other foods, as well as rapidly rising labor costs.

To attract workers, for example, McDonald's boosted hourly pay 10% to 15% over the past year. To help cover those higher labor costs as well as more expensive food and paper, the company said last month that it raised prices 6% in the July-September quarter from a year earlier. Yet even so, company sales leapt 14% as virus restrictions eased.