Did Utahns like ranked choice voting? A new poll has answers

Leo Romero and Yohanes Frezgi, both of Salt Lake City, vote at the Salt Lake County Government Center in Salt Lake City on Election Day, Nov. 2. According to a new survey, it appears Utah voters who participated in a ranked choice election approved of the process and want to see the system expanded. (Kristin Murphy, Deseret News)

SALT LAKE CITY — Ranked choice voting made its debut across 21 Utah cities and towns during this past election, marking the most widespread use of the system the Beehive State has seen to date.

And according to a new survey, it appears Utah voters who participated in a ranked choice election approved of the process and want to see the system expanded.

"It's clear to me that people, the voters, like ranked choice voting. We found that in past, that until you have a ranked choice election, voters are very skeptical, and as soon as they use it, they become converted. And it appears that's what happened here," said Stan Lockhart with Utah Ranked Choice Voting, the group that carried out the survey in conjunction with Y2 Analytics. 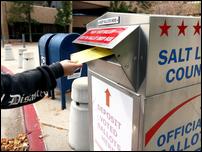 21 municipalities debuted ranked choice voting programs — how did it go?

Ranked choice voting made its debut across 21 Utah municipalities Tuesday. Now we're starting to gauge how Utah clerks, voters and candidates feel about the system.

What did Utahns think of ranked choice voting?

Lockhart said those opposed to ranked choice elections often paint the process as complex and that it could result in mistakes made on behalf of the voters.

"Opponents of ranked choice voting would have you think that this is so difficult that voters can't figure it out. And frankly, it should be somewhat offensive to voters to be told they're too dumb to figure out how to rank their choices. The truth is, it's very easy to use," Lockhart said.

He pointed to the following survey results:

The results are more scattered when Utah voters were asked whether they liked the process, although most respondents still expressed support for ranked choice.

The survey also showed most Utahns are satisfied with their elections, regardless of whether they voted in a ranked choice election or not.

In some elections, voters claim "because their favorite candidate has little or no chance of winning, their vote will be wasted," according to the survey. Therefore, they select a different candidate. Lockhart says a ranked choice election puts these fears to rest.

"Between splitting the vote, the spoiler effect and only voting for one candidate, all these strategies used in plurality voting don't benefit candidates in ranked choice voting," he said.

"So the candidate who wins is the person with the broadest and deepest support, and you don't have somebody with a minority support slipping in because two or three candidates have split the vote."

The survey asked Utahns who used ranked choice voting whether they were more or less likely to vote for their first choice — the results suggest they were.

Utahns were also asked questions on elections rules and the concept of winning by majority versus plurality, something that Lockhart says is one of the biggest advantages of ranked choice elections.

However, once presented with "additional details about how ranked choice voting ensures a candidate wins a majority of the votes in an election," the survey reads, roughly 85% of respondents that participated in both ranked choice and standard elections said that a candidate should receive a majority.

The future of ranked choice voting in Utah, and whether residents want to see the program expanded to statewide, partisan elections, is murky. Survey results suggest voters show allegiance for whichever election process they participated in.

It remains to be seen if the system will be expanded, a move that would require legislative approval. Rep. Mike Winder, R-West Valley City, supported expanding ranked choice voting in the 2021 session, though his bill, HB127, did not get a hearing.

In the days following Utah's municipal elections, Salt Lake County Clerk Sherrie Swensen said she was "pleasantly surprised" with how the process went. But she had reservations about expanding ranked choice voting to larger elections.

"It could be applied to a partisan primary. And that's doable because there aren't as many contests. But if they try to apply it to a general election, it will absolutely devastate our vote-by-mail system," Swensen said.

One of the key problems, she said, is that it would result in a complex, multipage ballot. For the 2020 general election, the ballot would be four to five pages long. That could result in administrative problems around ballot verification, processing, even displaying vote totals.