Have You Seen This? Someone should tell that guy his dog is a crocodile 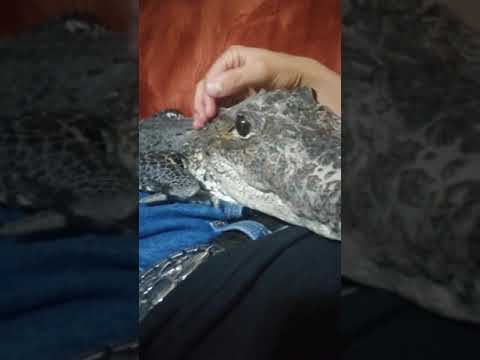 YouTube: Pet Crocodile Rests Head on Owner's Belly as They Scratch her Head

THE COUCH — When I was a kid we had an orange tabby named Otis. Otis was a jerk.

That cat terrorized me to no end. He'd corner me in the hallway and just stare at me waiting for me to make a move. No matter how I tried to pass that angry cat I would get attacked. My ankles constantly had scratches and teeth marks all over them.

One day when I was about 15, Otis climbed onto the couch and snuggled up to me for the first time ever. This was a tense moment, to say the least. The cat got near me without attacking me, so that was a good sign, but now what? Could I pet him? Should I leave him be? Will he bite me if I tried to move? Somehow the answer to all of these questions was, "yes."

This was a tough relationship and made growing up in the Clyde home rough at times for me. I lived with this fear in the back of my head at all times knowing that cat was somewhere waiting to play mind games on me and eventually attack me.

I might be wrong, but I feel like that's how this guy feels with his pet crocodile.

In this short video, a man is lounging on his couch when a croc starts climbing up his body to get closer to him. The guy reaches out and starts scratching the croc's head like he's a dog. I mean, I think this guy knows, but maybe someone should tell him that's a crocodile and not a dog suffering from eczema.

Regardless, it's pretty nuts for me to see this relationship between human and crocodile — but it's also pretty cool, even if it did bring up some traumatic memories for me.

Rest in peace, Otis. I do not miss you. 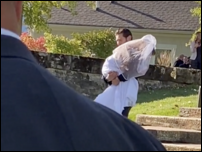 Groom carries bride's twin sister who has disability down the aisle

There's so much sadness in the world that it's important to celebrate moments of beauty and compassion, like this charming video.
×