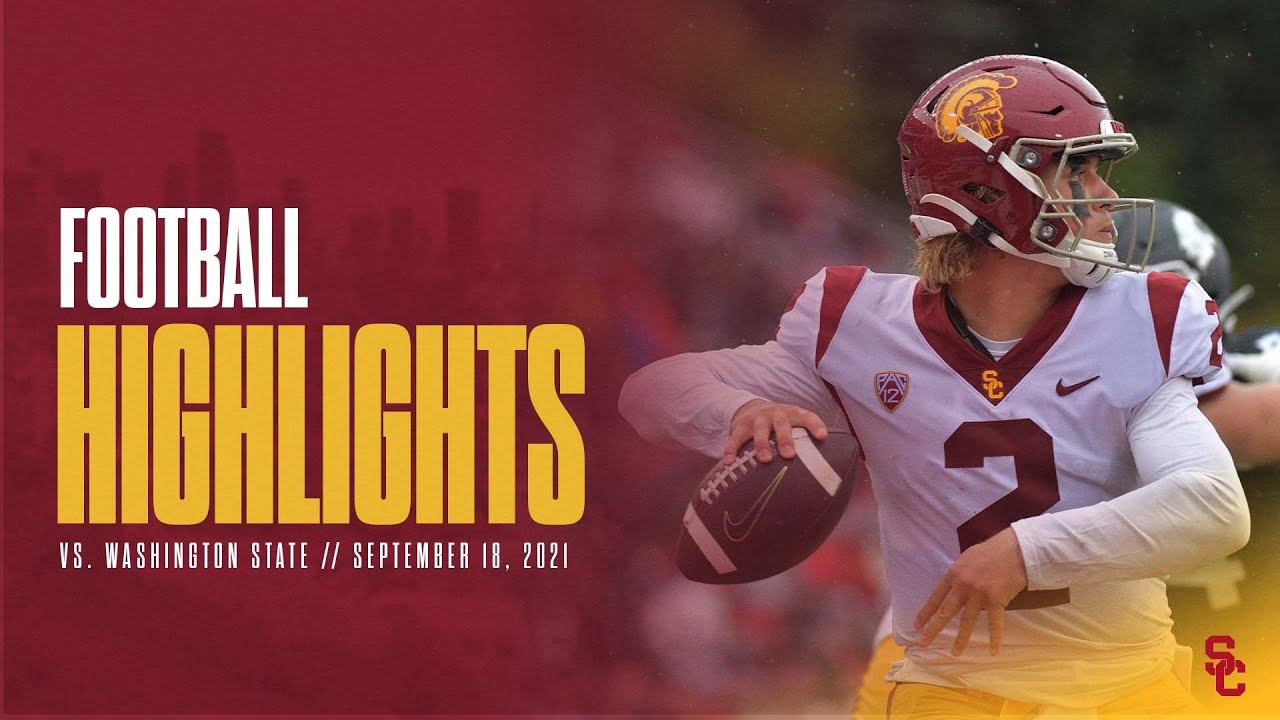 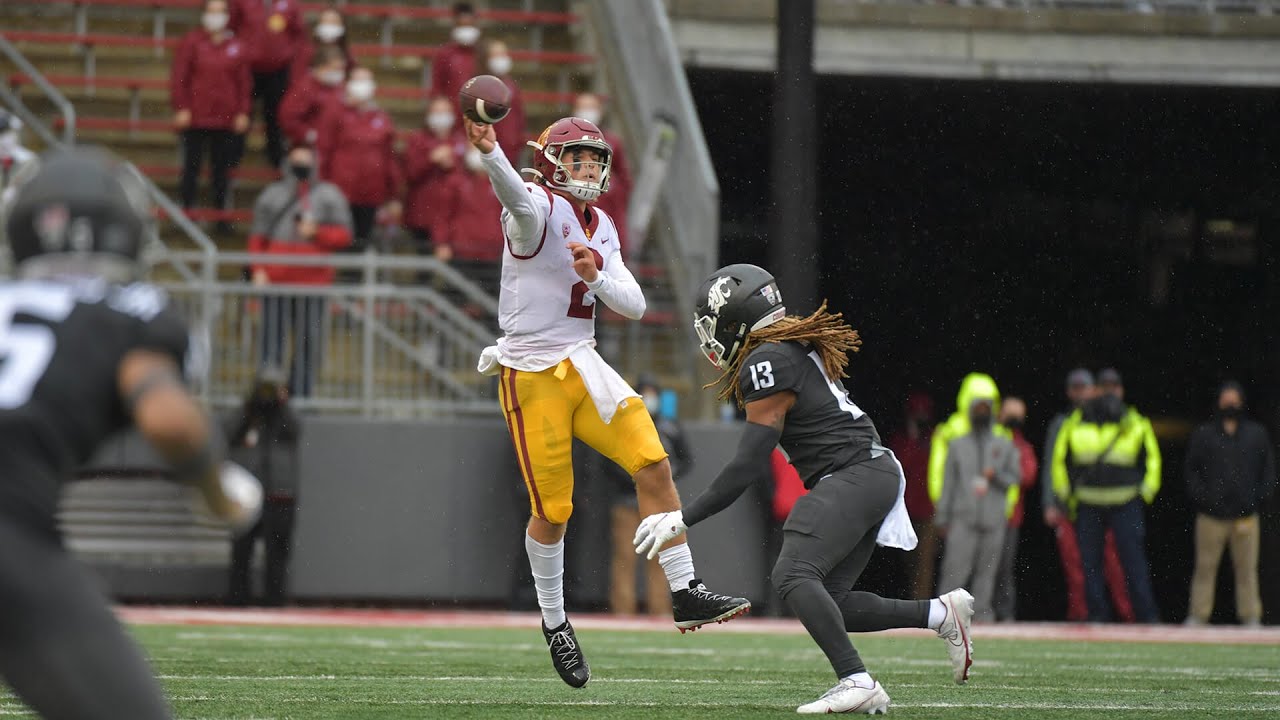 Jaxson Dart throws for most passing yards in a USC debut with 391 to down Washington State, 45-14

SALT LAKE CITY — Jaxson Dart stood in front of an overflowing group of road USC fans and the Trojans' marching bad, leading the traditional postgame with sword in hand for the first time in his collegiate career.

There was no doubt who would lead the custom Saturday afternoon — even as he descended the ladder with a noticeable limp.

Dart completed 30-of-46 passes with four touchdowns to help USC overturn a 14-0 deficit and rally for a 45-14 win over Washington State in his collegiate debut Saturday afternoon in Pullman, Washington, entering the game as an injury substitute and lifting the Trojans to a 2-1 record with their first Pac-12 victory.

Dart set a USC record for the most passing yards by a quarterback in their debut, finishing with 391 yards through the air to go along with a team-high 31 yards on the ground. The previous record holder was JT Daniels, who threw for 282 yards against UNLV in 2018.

"I'm super fortunate to be around a group of guys and coaches who show a ton of resiliency and confidence in one another," Dart said after the game. "And like coach said, our main goal, and we're going to face some adversity, but we have to go 1-0, and win that moment."

Kedon Slovis, who exited the game after the first series with an apparent injury, replaced Daniels due to injury after a season-ending knee injury late in the first half of the Trojans' season opener against Fresno State in 2019. Could Dart do the same thing to Slovis?

With the Trojans being guided by interim head coach Donte Williams, the fresh-faced quarterback with his signature eyeblack streak just might be the answer USC's offense has been seeking.

"No quarterback battle," Williams told USC radio after the game. "It's a battle at every position on this team. These guys have to go out and compete, and that's the way it should be at USC. The guy behind you should be just as good as you."

True freshman QB Jaxson Dart gets his first sword honors with the @USCTMB following his first start and win as a Trojan: pic.twitter.com/zwpzNGr4AY

For Dart's part, playing in the game as early as he did — and watching Slovis struggle his way off the field — was a shock.

"I think those moments always hit you when you are least expecting it," Dart said. "It was the first drive and we were just starting to get something going and I was just super excited, even though I felt terrible for Kedon."

Sitting next to the interim coach and standout receiver Drake London, who Dart targeted 13 times for 170 yards and two scores, Dart wore a face mask and stared down at an ice wrap around his knee moments after visibly limping off the field.

And he never felt better.

"I'm good," he said succinctly when asked about his knee.

Dart certainly looked like a more-than-capable college quarterback, setting the aforementioned USC freshman record in the third quarter — well before his fourth touchdown pass, a 36-yard fastball to Kyle Ford that put the Trojans up 45-14 with 6:12 remaining.

He opened the game with two long completions on his first drive, and even when his second series ended in his own lost fumble, the Trojans emoted plenty of confidence in him.

The confidence was rewarded when Dart found Gary Bryant Jr. for a 38-yard touchdown on fourth-and-nine with 32 seconds left in the half. The Trojans were donw 14-7 at the break — but the comeback felt imminent.

"It was a great ball by Jaxson," said Bryant, who finished with 56 yards on three catches, including the touchdown, and added a rushing touchdown on a swing pass from three yards out with 6:16 left in the third. "Every ball is right in your face, no matter what quarterback is in there."

Added his coach: "We were thinking about kicking the field goal. And then next thing you know, Jaxson and Drake were like, 'let's go.' You could see the look in the players eyes, and I was all in.

"One play turned the whole game around."

The Kaysville native wasn't perfect; he also threw two interceptions, and fumbled the ball on a quarterback run where he did everything right before a Washington State defender punched the ball from its cradle as the Cougars took a 14-0 lead.

But the Gatorade national high school player of the year rallied the Trojans back, pulling within a score with his first career touchdown — a 38-yard strike to Gary Bryant Jr. on fourth-and-nine with 32 seconds left in the half.

In his first half of college football (sans one drive), Dart completed 12 of 18 passes for 156 yards, an average of 8.7 yards per completion, one touchdown and an interception. He also ran five times for 35 yards, a 7.0 yards per carry clip that included a shot to his knee wherein the Utah native was evaluated by the medical team at the half.

The Trojans tied the game on Dart's 5-yard touchdown to Drake London on USC's first series of the second half, 14-14.

Dart found Drake London for his third touchdown of the game, a rocket over the middle 31 yards that London leapt and stuttered over the goal line to give USC a 35-14 lead at the end of the third quarter.

Sure, he made some mistakes — as any true freshman making their collegiate debut might. But Dart also got some help from former Utah State defensive coordinator Todd Orlando, including Tuli Tuipulotu's fumble recovery in the end zone for a 28-14 lead, and three turnovers to balance Dart's two interceptions. The Trojans added three sacks on the day.

A three-year starter at Roy, Dart transferred to Corner Canyon before his senior season and led the Chargers to a third straight state title while watching his own recruiting blow up. In playing under quarterback whisperer and head coach Eric Kjar, Dart set a state single-season record with 67 passing touchdowns and finished with 10,683 yards in his four-year career — the fifth-best mark in state history and best since Milford's Bryson Barnes put up 11,525 for Milford from 2016-19.

After racking up accolades that include national player of the year from MaxPreps and Gatorade and state POY awards from the Deseret News, among others, Dart committed to USC on the outset of the early signing period and graduated early to get to Los Angeles in time for spring ball.

After impressing in the spring, the 6-foot-3, 215-pound dual-threat signal caller was named Slovis' primary backup by head coach Clay Helton. A week after Helton was fired following the Trojans' 42-28 home loss to Stanford, Dart seized the his role in the first quarter against Washington State and ran with it.