How Utah is succeeding — and falling short — in helping the homeless

In the year marred by the COVID-19 pandemic, Utah has continued its four-year downward trend in the number of people experiencing homelessness for the first time, according to the annual report by the Utah Department of Workforce Services. That figure is down 21.7%, from 9,493 people in 2017 to 7,433 people in 2020.

But even though Salt Lake County's three new homeless resource centers were designed to cycle individuals out of emergency shelter situations as fast as possible with a higher focus on diversion and housing when available, the length of time people are staying in those shelters has increased from an average of 55 days in 2019 to 66 days in 2020, according to the report.

While Utah's homeless system continues to miss one of the goal laid out in the state's strategic plan to make homelessness brief, the report does show successes in the state's effort to make homelessness "non-recurring," or to limit the number of people repeatedly finding themselves homeless. The state met that goal, the report states, by reducing that number from 32% to 29%.

"The system is highly effective in keeping the most vulnerable in housing," the report states.

So while the data shows Utah's system is struggling to cycle people out of emergency shelters, it also shows the state is succeeding most with those that are able to get into housing.

"Looking at the report, it's just how successful we are once somebody gets into a stable housing situation," he said. "And that continues to increase and is highly successful when somebody now doesn't have to worry about a roof over their head."

More than ever, housing is an increasing challenge as Utah faces skyrocketing housing prices. So while the state excels at keeping or lifting people once they get into housing, supply of permanent housing continues to be an issue.

"We need more of that type of housing," Niederhauser said, pointing to the 2019 opening of The Magnolia, a $17 million, 65-bed permanent supportive housing facility in Salt Lake City. "I know that The Magnolia was pretty expensive per unit, so we probably need to look at a less expensive way of providing that housing after shelter." 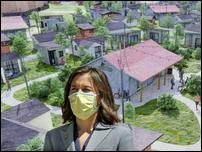 Salt Lake City is planning a tiny home village to house hundreds of homeless. But where will it be built?

In June, Salt Lake City Mayor Erin Mendenhall unveiled an ambitious plan to start building a master-planned tiny home community to house the homeless — and have some homes ready for move-in before winter sets in this year.

Those are efforts Niederhauser said his office is undertaking with the Utah Department of Workforce Services. They hope to use more one-time federal money to fund housing projects to help cycle more people out of emergency shelter.

"These motel conversions are really popular right now," Niederhauser said, pointing to an increasing trend across the nation of states buying underused hotels to house the homeless. He also pointed to Salt Lake City Mayor Erin Mendenhall's plans to build a tiny home community in Utah's capital. "It isn't one solution. It's many solutions."

The pandemic brought over $14 million in federal COVID-19 relief aid that Utah has already used to combat homelessness.

From June 2020 to March 2021, that money expanded services by funding 66 projects across 30 agencies, supporting 7,563 individuals through homeless prevention, rapid re-housing, emergency shelter and street outreach programs, according to the report.

How COVID-19 impacted the data

While homelessness continues to be a troubling problem — evident by the persistent presence of camps on Salt Lake City streets and on the banks of the Jordan River — the numbers showed a fairly dramatic decrease in people enrolled in emergency shelter and transitional housing projects.

Tricia Davis, assistant director of the state's Office of Homeless Services, said one factor that could have influenced that roughly 2,000-person drop could be impacts from COVID-19, as more people sought to avoid congregate living situations like emergency shelters by perhaps looking to stay with family or friends before turning to shelters as a last resort.

"Just initially, I think that could be part of it," Davis said.

However, Davis added, it's important to note all three of Salt Lake County's new homeless resource centers were only open for a few months before the pandemic hit.

"Our new system that was put into place with the resource centers has not ever operated under normal circumstances," she said. So the data reflected in 2020 does not have a solid precedent to be compared to.

"That was a big shift for this system," she said. "So that's just something to keep in mind."

A possible uptick in unsheltered homelessness

Another crucial metric in the report — the annual Point-in-Time count that marks the overall number of Utahns experiencing homelessness on and off the streets during a single given night in January — comes with a giant disclaimer.

Citing the pandemic, the report states this year's Point-in-Time count totals "cannot be compared to previous years' unsheltered and total counts" in the ways counts have been compared in the past.

That's up from 3,131, including 704 unsheltered and 2,427 sheltered on Jan. 22, 2020, a year that state officials attributed the increase to better counting. Nearly 90% of that increase last year came from the number of unsheltered individuals — people sleeping on the street, in cars or outside of an emergency shelter.

"Through careful planning and the implementation of safety protocols and additional non- congregate shelter options, the homeless service system was able to provide shelter to roughly the same number of people on a single night as they were pre-pandemic," the report states. "While it is important to acknowledge that the Pandemic (Point-in-Time) count increased throughout the state, especially among those experiencing unsheltered homelessness, it is difficult to establish a precise measurement of the increase due to methodological differences between the 2021 Pandemic (Point-in-Time) count and previous (Point-in-Time) counts necessitated by COVID-19."

The unsheltered portion of the Point-in-Time count was "modified significantly" during the pandemic, the report states. Local homeless agencies did not collect any demographic or subpopulation data during this year's count.

"Instead, they simply reported the total number of individuals experiencing unsheltered homelessness on the night of the count to reduce the risk of COVID-19 transmission," the report states.

Due to higher COVID-19 case counts in Salt Lake County and recommendations from local health experts, the Salt Lake Valley Coalition to End Homelessness "reduced interaction between volunteers and those experiencing homelessness by having outreach teams and volunteers report those they observed experiencing homelessness in randomly selected census tracts on the morning of Jan. 28 rather than completing a survey," the report states. "These random samples were then extrapolated across other tracts anticipated to have similar unsheltered homeless populations to calculate the overall unsheltered count."

The report added: "While these modifications were necessary for the safety of all involved, they potentially impacted the results of the unsheltered counts across the state."

Asked if that figure, then, reflects an uptick in unsheltered Utahns, Davis said, again, the COVID-19 pandemic could be a factor that influenced more people choosing to live on the streets rather than in shelters. Plus, the economic fallout from the pandemic leading to job losses, strained budgets and now higher housing costs could have influenced that uptick as well.

"So as we're thinking about unsheltered homelessness increasing over the last year, those are things we need to take into consideration," she said.