Have You Seen This? Elephant breaks into kitchen and snags some snacks

Everyone needs a snack sometimes, including this elephant in Thailand. (Guardian News, YouTube)

THE KITCHEN — I was what you may call a husky child. Well, I called it husky. My mom called it big-boned.

Regardless, I had substantial size. To give an idea, I decided to join the wrestling team in seventh grade and that may have been one of the worst decisions of my life. I was 13 years old, and the average weight of a 13-year-old is 110 pounds. My weight class was 165. I had to wrestle freshmen with mustaches: It was a disaster. I got in one match and was pinned in less than 10 seconds.

I bring this up not to show off my embarrassing wrestling skills, but rather to set up my size. I'd like to blame genetics, but the real problem was Frito-Lay and his associates. I ate, and I ate a lot.

My mom once came home with groceries and while helping her bring them in, I found a brand new bag of BBQ chips that I needed in my tummy. I stopped helping, opened the chips and started eating. By the time my mom was done bringing in groceries, the chip bag was empty and I was full — for the next 10 minutes at least.

Mom: "John! Did you eat all those chips?"

Mom: "I just bought those and they're already gone."

John: "Why did you buy them if we weren't supposed to eat them?"

That didn't go over well.

But I feel like young John who would raid the kitchen for food and this elephant have a lot in common, for better or worse.

This is Boonchuay, a hungry elephant in Thailand. He decided he wanted some snacks and figured Ratchadawan Puengprasoppon's kitchen was a good choice. So, he decided to walk through the wall and help himself to some goodies.

I don't condone breaking into people's homes to eat snacks, even though I used to do that at my friend Scott's house when his family was out of town. Don't do that. I wasn't invited to Scott's house anymore after that, just like I'm guessing Boonchuay won't be receiving any formal invitations to a dinner party at Puengprasoppon's home any time soon. 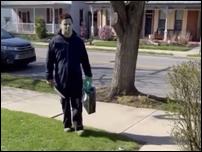 What do you do when your kid has a different icon than everyone else? The family in this video decides to get creative.
×