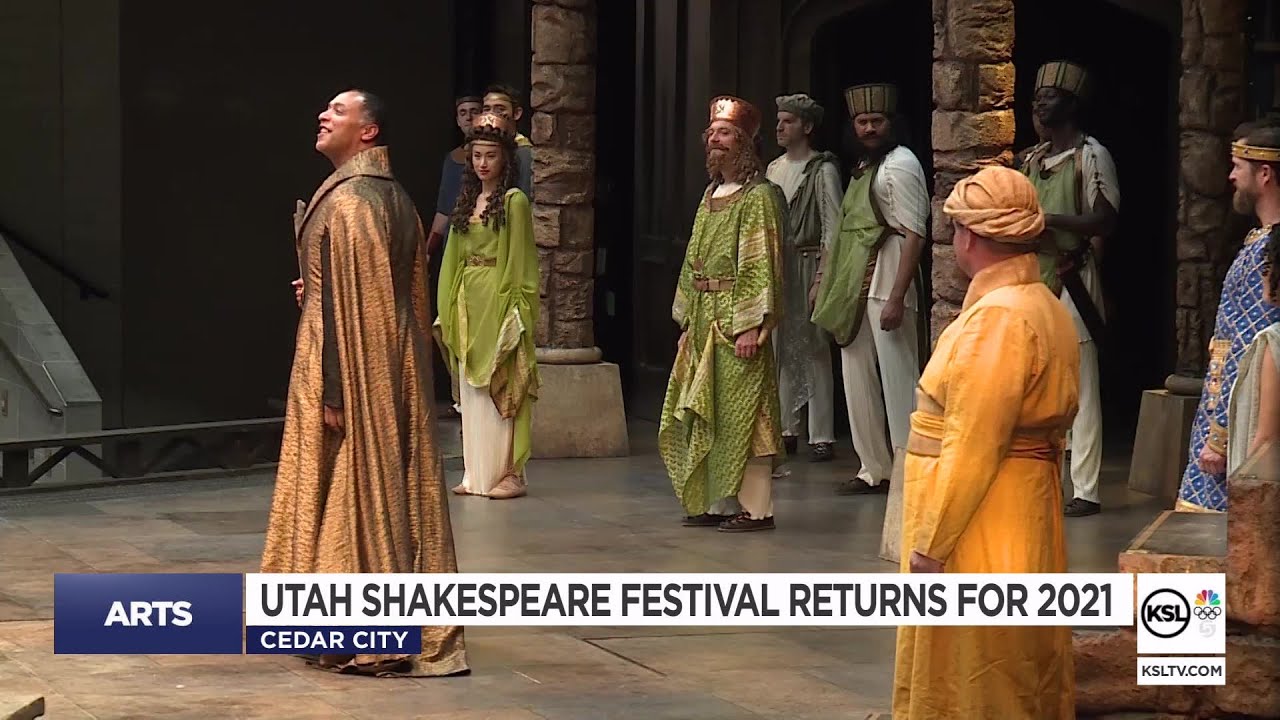 CEDAR CITY – The Utah Shakespeare Festival opened its season in Cedar City, celebrating a big anniversary and paying tribute to its founder. COVID-19 restrictions lifted just in time for the festival to open its three theaters and welcome audiences to what everyone hopes will be a very memorable season.

"Yo ho, yo ho, a pirate's life for me!" The words of a familiar song filled the air as performers from The Green Show entertained an audience on the lawn outside the mainstage theater before the Opening Night production on June 21. These free shows are popular with both those who have tickets for evening productions and townspeople — men, women, and children — who love to interact with singers, dancers, jugglers, and in this rendition – mermaids! This season that interaction will happen at a distance.

"There's no blueprint for producing theater during a global pandemic," said Artistic Director Brian Vaughn. Inside the Englestad open-air theater, Executive Producer Frank Mack and Vaughn welcomed theatergoers to the festival's 60th anniversary by reminding everyone of the man who started it all.

"In the wake of the passing of our founder Fred Adams, this is doubly moving to be here, to see his dream realized, and for all of you to be here celebrating this unique spectacle of 60 years," said Vaughn as he touched his heart.

In 1962, theater professor Adams, came up with the idea to do Shakespeare every summer at what was then Southern Utah State College.

The vision grew, bringing more than 120,000 people to Cedar City every summer and bringing a regional Tony Award in 2000. All season Fred, who died in February of 2020, will be remembered. A special tribute evening is planned for Sunday, Aug. 8.

Mack paid tribute to the designers and crew who have been hard at work for months to prepare for the season. "It's our first year back after missing an entire season because of the pandemic and that adds a really wonderful dimension to the performances."

Then, it happened, Act 1, Scene 1 of "Pericles." "To sing a song that old was sung," said the title character.

Ticket sales are excellent, administrators said, with no social distancing or masks required. The cast and crew called it a reunion. Britannia Howe, director of both "The Green Show" and "Cymbeline," described why theater is so important this year. "Post-pandemic, it helps heal communities. As we gather together and we sit together in a space, we are able to have a context of all these different feelings we are experiencing."

At the Randall L. Jones indoor Theatre, the curtain went up on William Shakespeare's "Comedy of Errors." The audience cheered and applauded one character's attempts to carry multiple suitcases by picking up the final one in his teeth!

Utah Shakes, as so many call the festival, is open for business with a season built around overcoming reconciliation and renewal. "All of those things," said Vaughn, "are representative of where we are currently in our world – about people coming back, finding love and moving on, in the wake of great change."

Shakespeare Under the Stars and more is underway in Cedar City with eight productions, some shows running until mid-October.

For details on the season and all of the extras visit The Utah Shakespeare Festival website.