Bob Donaldson and his crew of card players have gotten together to play bridge for decades. (Ray Boone, KSL TV) 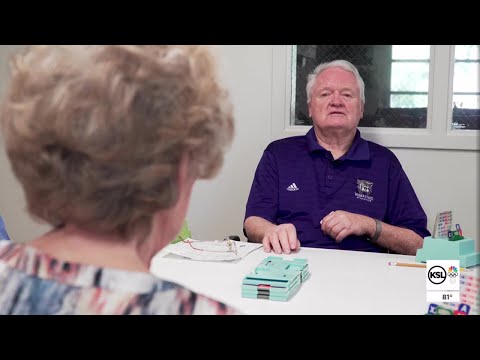 RIVERDALE — Neither rain nor sleet nor a global pandemic could stop Bob Donaldson and his crew of card players from getting their games in. Now, he's achieved a level he's spent decades working toward.

Of course, if you call it "just a game," Donaldson might try to set you straight.

It's also a way to ensure their minds keep playing with a full deck. "Keeps us all younger," Donaldson said. "I think it really contributes to a person's health."

The club has been around for 56 years, since LBJ was in the White House. Donaldson runs things — you might call him the big boss of bridge, or the godfather of the game room.

Most of the players openly acknowledge his skill. They've certainly been playing with him long enough to know. His bridge partner is practically family.

Others he's known for more than 50.

"What decade?" asked Becky Shreeve with a laugh. What decade was it?"

They meet at the Riverdale Senior Center three times a week, which isn't quite enough for Donaldson.

"We will play tonight, yes," Donaldson said. "Not this same group, it'll be a different group of players.

You see, Donaldson's a bit of a card shark.

"I played in the World Series of Poker," he said.

And he's spent plenty of time circling the tables in Vegas. "I was ninth in the world in Blackjack play," said Donaldson.

But he's kept climbing out of the waters and back on to the bridge. Although games like poker or blackjack may attract more mainstream attention, he says bridge is the epitome of card games. To Donaldson, victory in any other game can't compare to the level of play necessary to win at a big bridge tournament.

Even COVID couldn't take out their club. Though they stopped playing for about three months and the senior center wasn't an option, they moved to Donaldson's house.

"We wore our masks and we washed our hands and wore gloves," he said. "We obeyed all the rules, and we were very careful in how we participated."

Playing bridge has become a part of Donaldson's identity. He's got an entire trailer filled with equipment, like over a hundred tables he's used to organize huge games across the country.

And he's played with a few names you might have heard of, like Bill Gates and Warren Buffett. When asked to rank their abilities, Donaldson could only offer a thoughtful pause and the word "fair" before laughing.

No, he didn't hustle the billionaires — bridge isn't really about making money.

You see, a big part of bridge is how many points you're able to accumulate over a lifetime.

"I was always looking for the next level," Donaldson said.

He's risen through those levels and finally hit a major milestone.

Just to put that into perspective, he thinks there's only three others with that status in the entire state. He compares the system to that of chess.

"We have a rating system that we work for and strive for, to get to certain ranks," Donaldson said.

At 84 years old, Donaldson doesn't think he has enough time to climb any higher.

"I was very proud to reach that level," he said.

But if playing bridge really does help keep them young, there's no telling how many hands he has left to play.

"It really keeps our minds active," said Donaldson. "And the more active your mind is, the more healthy I think the person is."