Jacob Sheffield, a graduate student at BYU, loved to play with origami as a kid. Now, it’s turned into a passion for making surgery safer. (Aubrey Shafer, KSL TV) 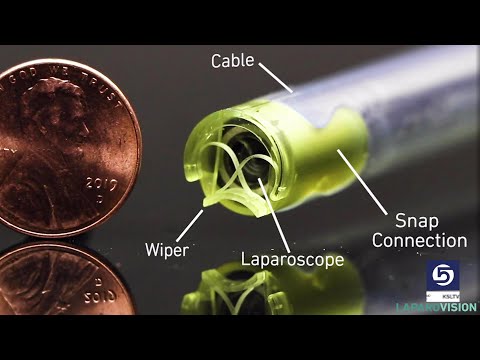 PROVO — Imagine driving through a storm without your windshield wipers. Your view is fogged up and obscured with water droplets. That's what often happens to surgeons during laparoscopic surgery, a common way to operate. Using creativity, a Brigham Young University student is hoping to make surgery less risky.

What was once child's play, is now a passion for Jacob Sheffield. "As a kid, I would always make these designs and we would draw faces on them," said Sheffield, a graduate student at BYU.

From his closet in BYU student housing, and from the lab on campus, Sheffield hoped to solve a common problem in laparoscopic surgery, procedures performed through small metal ports inserted in short incisions in the skin.

When the lens of the laparoscope is obscured by tissue during surgery, it increases the risk of injury to the patient, according to the National Institutes of Health.

Most of the time, it has to be removed and cleaned, increasing operation time and blood loss. "For a third of the surgery, surgeons actually operate with some kind of impaired vision," Sheffield said. "That means it's slightly foggy or slightly blurry, but they're not willing to pull the scope out completely."

Applying origami principles to engineering, Sheffield worked to solve it. "Basically (it will) be a miniature windshield wiper, and this would allow us to have this whole piece that's one single part," he said.

With just one hand, a 10-year-old Provo girl with the music bug refuses to be held back.

A single piece means there's no risk of the part of the device breaking off inside the patient. "You can deploy it out, wipe it, and deploy it right back in," Sheffield said. A wiper blade cleans the lens. "Now you have this entire mechanism which snaps onto it and the whole piece is a single piece of metal, which is folded into the structure," he said. And voila! It's a tiny device that allows the surgeon to clean the laparoscope while it's inside the patient. "This is a 10mm scope, and so the wiper on this is the size of my fingertip," Sheffield described.

He won the BYU Student Innovator of the Year award because of his invention. Now he hopes to take it into the real world to make surgeries safer for patients.

Though there's still a long way to go, Sheffield has created a startup to take it to the market.

"The idea of losing vision in a critical spot during the surgery, that can be life-threatening," he said. Never foreseeing that folding and creasing as a kid could lead to this. "Oh, I never, no. It sparked this curiosity and, in the moment, I never thought that origami could lead to a practical application," he said.

Heather Simonsen
Heather Simonsen is a five-time Emmy Award-winning enterprise reporter for KSL-TV. Her expertise is in health and medicine, drug addiction, science and research, family, human interest and social issues. She is the host and producer of KSL-TV’s Positively 50+ initiative.