SALT LAKE CITY — Could some Nevada-like water or lawn restrictions be in Utah's future? Maybe.

"Certainly there are some good examples from other states that we can learn from — some other states that have drier climates or less water storage than we have," Cox said during his monthly PBS Utah news conference.

A new Nevada law approved earlier this month targets "nonfunctional turf," or commercial grass at office parks, street medians or entrances to housing developments. The law requires about 30% of all grass in southern Nevada to be ripped out by the end of 2026, according to the Las Vegas Review-Journal. The new law also prohibits Colorado River water from being used to water nonfunctional turf starting in 2027.

According to Southern Nevada Water Authority estimates, the new law should lead to the eventual removal of up to 4,000 acres of nonfunctional grass, or about 30% of the 13,000 acres of grass currently in the Las Vegas Valley, the Las Vegas Review-Journal reported. For over 20 years, the Las Vegas-area water authority has been encouraging residents and businesses to tear out their lawns, with an incentive program covering $3 for every square foot of turf converted to desert landscaping.

"That's certainly something we're interested in and that we're exploring," Cox said of Nevada's new law and incentives for tearing out "nonfunctional" grass.

As one of the seven states that rely on the Colorado River, which is now languishing in the West's "megadrought," Utah has taken some heat from its southeastern neighbor Nevada for its water sense — or lack thereof. 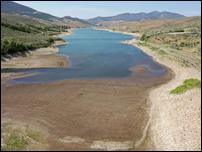 'Lawn' is becoming a 'four-letter word' amid Utah's dire drought

Raising water rates on big water users. Paying Utahns to rip out their lawns. Increased xeriscaping. These conservation efforts are already happening or expected to happen in the near future in southern Utah.

"One glance at (the federal government's drought map), and any reasonable person would understand that the region needs to take its water conservation efforts up several notches," the Las Vegas Sun wrote in a May 26 editorial. "But then there's Utah, which clearly has lost its senses over its bid to open a new pipeline from Lake Powell to St. George."

Utah lawmakers earlier this year set aside $9 million in one-time money and $600,000 of ongoing money to set up the Colorado River Authority of Utah, for what legislative leaders said would "protect Utah's share" of the drought-stricken Colorado River into the future.

"The bill was the legislative equivalent of saying 'bring it on' to Utah's neighbors, all of whom staunchly oppose the St. George pipeline," the Las Vegas Sun wrote in its editorial. "It's appalling: Utah would rather dig in for a long legal battle than work with other states to protect the water supply and help address the underlying causes of the drought."

Utah leaders argued Utah has been "behind the times" with regard to protecting its fair share of the Colorado River.

"It is not about taking water away from other states," House Speaker Brad Wilson, R-Kaysville, told the Deseret News in February. "It is about protecting Utah's share."

Utah lawmakers in an interim committee meeting on Wednesday listened as water district officials detailed ongoing and future efforts to curb water use in their areas — including efforts in southern Utah to financially incentivize Washington County residents to "rip out" their lawns.

Cox, pointing to local water districts as agencies that are making decisions about water conservation in areas, again urged Utahns to voluntarily cut back on their own water use.

"Just a reminder that we are still living in a desert, and we are in extreme drought and exceptional drought in virtually every part of the state," said Cox, who has already issued three drought emergencies this year, cutting lawn watering at state facilities and asking cities and counties to do the same, like Salt Lake City already has.

Asked if Utah should be pumping the brakes on new development until the state can get a handle on its water crisis, Cox said it's up to local communities "to make that determination."

"This is one of the mistakes that we do make, is just that assuming that every water district is the same. They're all extremely different," Cox said. "Many have significant resources that can could last for decades and decades. Others have more limited resources. So those decisions will definitely have to be made at a local level."

"The minute you limit growth, then only rich people can live here. And I'm not interested in that at all. I am interested in using the resources that we have more wisely."

What Utah "should be doing," Cox said, "is limiting park strips next to fast-food joints that make no sense, where we end up watering the sidewalk. ... They do absolutely nothing to add to the community, all they do is waste water significantly."

"So there's so much more we can do to limit our water, to conserve our water," Cox said, "besides just just limiting the ability for our kids and grandkids to live here."

Pressed by a reporter that the state of Utah is "pushing growth," pointing to a new ski resort being planned in Wasatch County, Cox said Utah is a "very pro-development state" and he's "not ashamed of that in any way."

"Droughts have come and droughts have gone throughout history. We understand that climate is changing, there's no question about that. And, and so what we're doing to prepare for that is exactly what I what I just mentioned," Cox said.