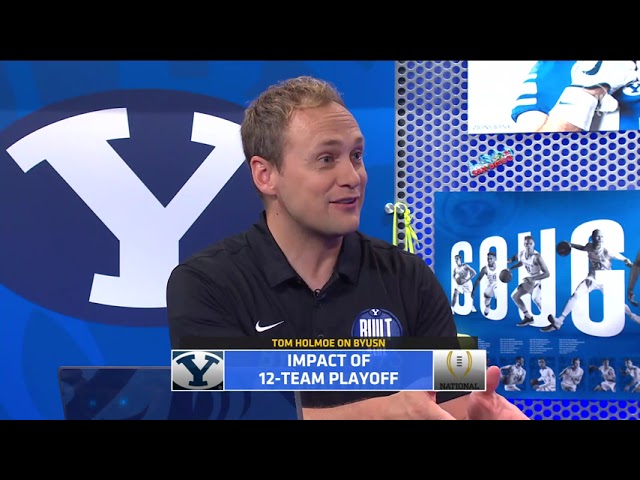 PROVO — During the program's annual media day Thursday at the BYU broadcasting building, BYU football didn't drop any new scheduling agreements and no word emerged on joining a conference or abandoning the Cougars' decade-long run as an FBS independent.

There was still plenty of talk about football — like commending the 47,000 tickets currently sold for the Cougars' 2021 season opener against Arizona in Las Vegas, which is on pace to be the most heavily-attended non-home game in program history.

But there was something bigger to bring to the table, athletic director Tom Holmoe said.

Holmoe and the Cougars announced the creation of a new initiative, Built4Life, to help BYU athletes "prepare for life beyond BYU athletics and help them capitalize on future name, image and likeness (NIL) opportunities" through education, developing critical life skills, and managing business and extracurricular opportunities to help facilitate employment opportunities.

Whether NIL legislation — which goes into affect in several states from California to Georgia to Florida as early as July 1 — is fully passed or not by the NCAA, the organization will help prepare BYU athletes for the future, inside or outside of sports, Holmoe added.

"Right now, there are more questions than answers about NIL," Holmoe said. "But I like how Kalani and his team have stepped forward and said, 'this isn't just about money.' We're OK with our athletes making money off their name, image and likeness, but we also feel that there is more to life.

"When you say 'Built for Life,' I don't think there are any alums who don't feel like there's more there. We live in an incredible state, at an incredible university … where we can have learning experiences off the field. There's the classroom, there's the team, but now there are extra experiences where we can learn how to get your life going now."

The program is also changing, and could be adapted to further NIL legislation, head coach Kalani Sitake added.

"I think with flexibility and the different variabilities of name, image and likeness, we can help take care of our kids," Sitake said. "It allows us to take advantage of the economic situation we have in the state of Utah and the opportunities we have to mentor and help transition our student-athletes into adults."

As part of the new initiative, the Cougars moved the school's former director of compliance Gary Veronas into a new role as associate athletic director for student-athlete experience, where he will oversee an NIL committee at BYU with the purpose of integrating the NCAA's forthcoming practices and procedures regarding name, image and likeness in communications, marketing, compliance, corporate sponsorship and individual team operations.

The program's inaugural advisory board also includes Alex Barcello from men's basketball, Shaylee Gonzales from women's basketball, Lopini Katoa from football, and Dolita Shaw from track and field, among others.

Plenty of universities are partnering with outside companies and founding new initiatives to help manage NLI. The Cougars previously partnered with Opendorse to help guide athletes in branding and social media — including managing their name, image and likeness through social media like Twitter, Tik Tok and Facebook — and an hour after BYU's scheduled announcement, the University of Utah unveiled plans for its own initiative, called Elevate U.

But the Cougars' plan also includes several outside partners, including founding partners at the Salt Lake Chamber, the Utah Valley Chamber of Commerce and Silicon Slopes. Each organization has key ties to BYU, including alums like former Utah Gov. Gary Herbert who serves as executive chairman the Utah Valley chamber and Qualtrics co-founder Ryan Smith, who co-founded the Silicon Slopes Venture Fund to boost tech and startups in the state of Utah.

"It is an honor for the Salt Lake Chamber to join BYU as a founding partner of the Built4Life initiative," said Derek Miller, president and CEO of the Salt Lake Chamber, in a statement. "We look forward to working with BYU athletics to ensure the program's success there and to assist its adoption by other universities that will embrace its principles, practices and innovation to serve student-athletes in laying a foundation for personal and professional success that will sustain them well beyond competitive athletics."

Such partnerships will help BYU athletes progress in future careers — even outside of football, basketball or their respective sport.

"Built 4 Life includes partnerships with some of the most powerful business entities in the country, to help players not only maximize name, image and likeness while they play — but also carry it forward into the future," said former BYU national champion center Trevor Matich, who currently works for ESPN. "This foundation allows players to maximize their own partnerships, not just online, but in their offline relationships.

"There are very few college football programs who are even close to what BYU can do in laying that foundation with these partners."

Built4Life was launched Thursday through the football program, but will eventually extend to all athletes at the university. Several Cougar football players have already formed nonprofit entities, including quarterback Jacob Conover and kicker Cash Peterman, whose foundation raises money by selling and auctioning refurbished football helmets to help disadvantaged youth on the Wasatch Front pay for athletics-related expenses like registration, equipment and apparel, primarily in Utah and Salt Lake counties.

More information about the program can be found at BYUBuilt4Life.org.