SALT LAKE CITY – Police are crediting a crew of construction workers with possibly saving a woman's life as they investigate a stabbing in Salt Lake City's Pioneer Park on Thursday morning.

"Not what I was expecting today for sure," said Justin Fuertes. He was working on a construction crew that morning when he found himself answering the call for help.

Fuertes pulled into work at a new build site across the street from Pioneer Park on Broadway in downtown. That's when Fuertes said he spotted a few of his co-workers gathered around a woman.

"At that time I didn't know how bad it was. It was bad," said Fuertes.

"Sure enough, she'd been stabbed multiple times. Clothes covered in blood and in a state of shock for sure," said Ryan Gorzitze, Fuertes' co-worker.

Fuertes rushed to get a first-aid kit from his truck.

"I gave one of the guys gloves, I put on gloves, and then he went back and applied pressure to the lady's arm to stop the bleeding," Fuertes said.

Fuertes says the woman also had a stab wound to her stomach.

"Right in her stomach … That guy, he had a big knife," Fuertes said.

That's when Fuertes says the victim pointed to a man. "She pointed out to the guy who was sitting underneath a tree and said 'that's the guy who stabbed me.'"

The crew watched as officers approached the man. Fuertes says they told police he might have a knife. He says they heard police tell the man to drop his weapon repeatedly, but he didn't obey their commands.

"He ran towards the cops with the knife. Then that's when everything … shots were fired," Fuertes said. 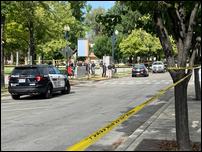 Salt Lake police shot and killed a man suspected of stabbing and critically injuring a woman in Pioneer Park on Thursday after they say he charged toward officers.

The man died at the scene, but the woman was rushed to the hospital. Police Chief Mike Brown credited the workers with saving the woman's life during a press briefing on Thursday. However, Fuertes said the credit goes to the woman fighting for her life.

"I just did everything I could to help," Fuertes said, "I really hope she makes it. Prayers for her for sure so she can recover. I'm no hero." Fuertes said.