SALT LAKE CITY — It's only April and more than 155 wildfires have already scorched the drought-ridden parts of Utah.

Kaitlin Webb, the statewide prevention and fire communications coordinator for the Utah Division of Forestry, Fire, and State Lands said 98% of those fires were human-caused.

"Only three of those have been natural cause," she explained.

It's a troubling continuation of last year's record for human-caused fires: 77% of nearly 1,500 blazes started from things like sparking equipment, target shooting and fireworks.

Almost all of Utah is in a severe drought, which means wildfire officials are on alert and preparing for what could be a busy and dangerous fire season.

"As far as fire danger and our concern for that potential for wildfires, it's statewide this year," said Webb.

Aside from hoses and helicopters, Utah has another powerful tool to stop the flames: a map of fires from 1999 through 2020.

"Historical fire data is something that we rely on for pretty much everything that we do in some capacity," explained Webb.

By mapping previous fires, they can better prevent future fires.

"If we're seeing consistent fires in the same area," said Webb, "we can take a look at what's causing them. That gives us a platform to start problem-solving, figuring out how to prevent those in the future." 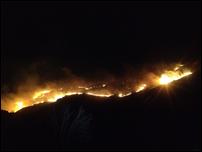 There were more human-caused wildfires started in Utah during the year than any other fire season on record. In fact, the 2020 fire season was the most active — in terms of fire starts — since at least 2012 and it also proved to be costly.

Aside from tracking trends, Webb said they can look back at this historical data to help them fight current fires and figure out where they might have already laid suppression lines.

"We can take a look at the past and see how fire moved through an area, and that can guide our suppression tactics in the present, how the vegetation is there, so you know how to react. You've seen fire move through that area before, so you know the most effective way to suppress it," she said.

If a wildfire sparks in an area without historic fires, Webb said that could mean big, dangerous fires like the Dollar Ridge Fire.

"If an area hasn't seen wildfire in a long time, or there hasn't been any sort of mitigation efforts in that area, fuel loading is a big factor," she said. "If we have really thick, dense vegetation, fire is often going to burn at a much higher intensity in that area."

Webb elaborated that in some spots where there are multiple fires over multiple years, people's behaviors seem to have the biggest impact.

"You'll sometimes see a lot of little fires in a certain area, and that probably has a lot to do with recreational activities or human influence in that area," she said.

155+ wildfires in UT so far. All but 3 were human-caused. But as Kaitlin Webb from @UtahFFSL explains, preventing fires doesn't just mean putting out your campfire. @KSL5TV@MikeHeadrickTV@CindyStClair08#ksl#wildfireseasonpic.twitter.com/HIQM7qA0H0

That includes hot spots like Stansbury Island, which has had 17 fires over the last two decades. It's an area popular for target shooting.

Other areas that show overlapping historic fire data include the west side of Utah Lake near Saratoga Springs, and east of Santaquin, where the Pole Creek and Bald Mountain fires ravaged more than 100,000 acres in 2018.

Webb said factors like fuel load, weather and people all affect those hot spots. The latter, Webb said, is the biggest key to prevention this summer.

"The public needs to engage and play their part in terms of fire prevention and making sure that we're reducing the total number of sites we have," Webb said. "We can have a direct influence on how busy our wildfire season is."

When it comes to preparing resources for fire season, Webb said priority goes to areas where there would be the most potential for loss of lives and real property.

Fire season doesn't officially start until June 1 in Utah, but the state has already seen its first Red Flag Warning, indicating the potential for a busy summer for wildland firefighters.

Have you experienced something you think just isn't right? The KSL Investigators want to help. Submit your tip at investigates@ksl.com or 385-707-6153 so we can get working for you.