SALT LAKE CITY — Animal welfare advocates with Salt Lake County Animal Services are calling for harsher criminal penalties for those who intentionally injure animals after a dog was kidnapped last month and lit on fire.

"And ideally, where there is time served by that person for the crime they committed," she said.

It would also allow animal services to remove all animals from a home when an owner is found to have abused one animal, she said. Utah law now only allows the abused animal to be taken from the home.

Currently, those convicted of third-degree felony animal cruelty could face up to five years in jail and up to $5,000 in fines. But often, they get neither, said Callista Pearson, spokeswoman with Salt Lake County Animal Services.

Advocates also want to make sure those convicted of serious animal abuse cases can't have animals in their homes again, and will face enhanced sentences for if they're ever caught abusing an animal in the future.

Often, those who live with an animal abuser also risk getting abused, Pearson said.

"We're trying to find ways that we can protect not just pets but also the people who are in the same situation because oftentimes they're tied together," she said.

Michael Paul Busico, 40, of Tooele, was charged last month in 3rd District Court in connection to Dixie's animal's death with arson, a second-degree felony; torture of a companion animal and theft, both third-degree felonies; and failing to stop at the command of law enforcement, a class A misdemeanor.

On March 1, a witness saw a man on the frontage road off I-80 near 9300 West "pour liquid on a dog and then light the dog on fire," according to charging documents. Police believe Busico took Dixie from the owners' yard "to directly intimidate and threaten" his ex-girlfriend and her family, according to a police affidavit. 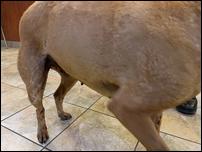 A man who police say set his ex-girlfriend's daughter's dog on fire to "directly intimidate and threaten" the woman and her daughter has been arrested.

Dixie received treatment at a local vet clinic. But after a week of surgeries, her owners said that Dixie would not be able to have a good quality of life again and had been given a year to a 1 1⁄2 to live under a best-case scenario, and the decision was made to euthanize her.

"It was really horrible, horrible circumstances, and just horrible what (the ex-boyfriend) did to this animal, and it was very premeditated and planned. And there were a lot of other factors that played into it," Butler said.

Butler said her division is working with Best Friends Animal Society, the Humane Society of Utah and several more animal agencies throughout the valley on Dixie's Law. They are currently drafting legislation and looking for a sponsor for the bill for next year's legislative session.

"Our officers responded to over 1,000 calls last year to animal abuse cases, but for the severity of the (Dixie) case and the fact that there was actually a witness to the case, you don't normally get witnesses who able to see what happened to an animal," Pearson said.

She urged anyone who witnesses an animal being abused, if feasible, to find a safe place to take photographs or video of it happening as such evidence will help prosecutors make a case against the perpetrator, write a statement describing what they saw, and call local animal control or police.

"Our hope is that we can get all of the cities that we serve on the same set of ordinances," Butler said.

She said the updated ordinances that will be considered by the Salt Lake County Council on Tuesday includes current city and county ordinances and condenses them into a "well-written, organized" version that will be easier to follow as residents move or recreate in neighboring cities.

Once passed by the County Council, county leaders hope individual cities will choose to adopt the ordinance "so rules aren't changing beneath" residents as they travel, Butler said.