Only thing left for No. 2 BYU men's volleyball after sweeping USC on senior night: win a championship 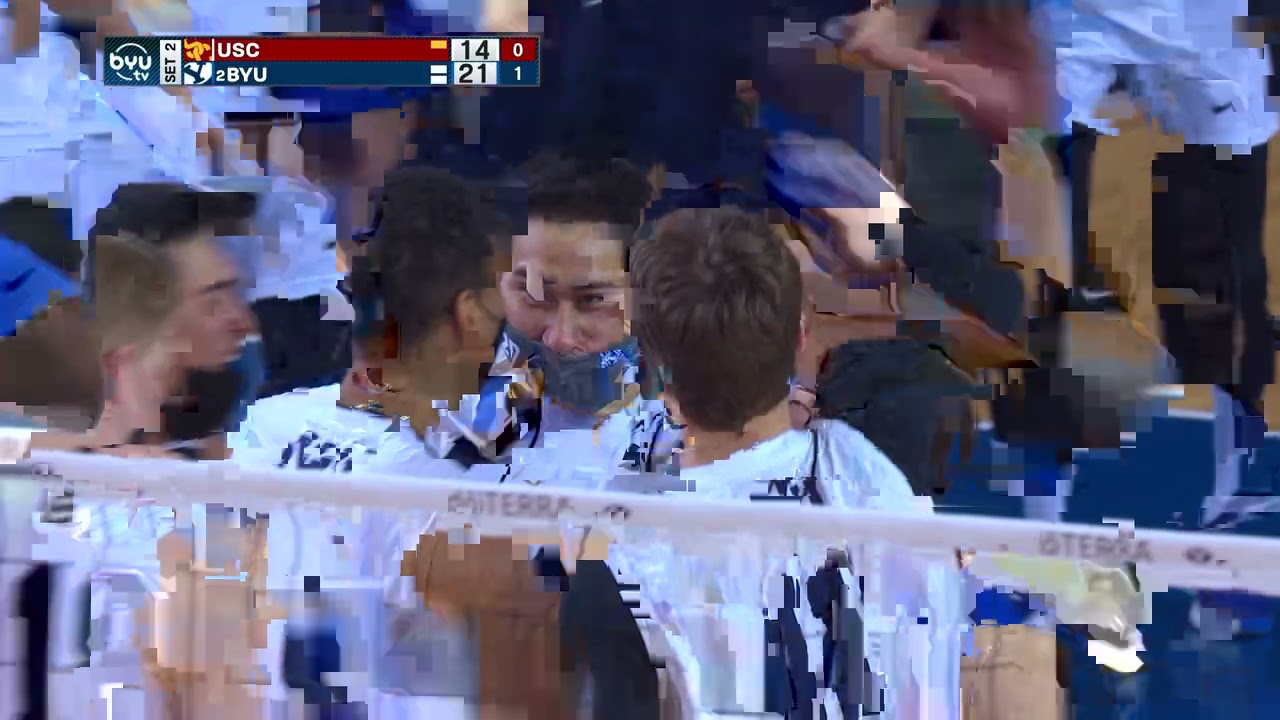 PROVO — After second-ranked BYU men's volleyball gutted out a 3-1 win over Southern California on Friday night in the Smith Fieldhouse, senior opposite Gabi Garcia Fernandez looked up in the stands and found two special people.

They were his parents, Rebecca and Jose, who made the trip from his hometown of San Juan, Puerto Rico, to be in attendance for the weekend's match. After the Cougars stifled a late USC run (aided by a replaced point due to a popped balloon), Fernandez did a short interview with BYUtv, then found his parents, and walked back onto the court with six other seniors for the annual rite-of-passage in the final regular-season home match of the season:

The group includes two NCAA semifinal appearances, a championship match appearance in 2017, a conference title from two years ago, five All-Americans, 13 all-league honorees, and Fernandez — the reigning MPSF Player of the Year, with numerous weekly conference and national awards.

It's quite the group in a class that doubled in size due to the COVID-19 pandemic.

But Fernandez stood out — just like he did Friday night.

"It's definitely an emotional night," said Fernandez, who will graduate this spring with a degree in Latin American studies. "I enjoyed my moment here at BYU. By far, it's the best experience I've had in my life. I'm going to come back, definitely."

The win marks the 26th consecutive victory for the Cougars (16-2) in Provo, where they will host the Mountain Pacific Sports Federation Tournament in three weeks.

And if Fernandez is going to get so much of the credit for helping BYU wrap up no worse than a share of the MPSF regular-season title, it's only right that the other senior attacking standout gets his due, too.

Is Eschenberg glad he came back? Of course, he is. The Cougars are, too.

"It was definitely a breath of fresh air for us, being able to come back," he said. "Last year felt like a punch in the gut. It really took a lot out of us. We were happy with what we had done and sad with what we weren't able to finish.

"Being able to come back this year was really rejuvenating and to play with this team again. It's awesome to have such a fun group of guys to play volleyball with."

Eschenberg, who is married to BYU women's volleyball standout Kennedy Eschenberg (nee: Redding), didn't have to come back for his second shot at a senior season.

When the NCAA moved to cancel spring championships due to the COVID-19 pandemic and left thousands of athletes across the nation in limbo — most notably the baseball, softball, volleyball and lacrosse players who had years cut short less than halfway through the 2020 season — it left the Cougars in a bit of a jam.

BYU had just split with then-No. 1 Hawaii on the road, had assumed the crown of best men's volleyball team in the country, and had several future professionals on its roster — notably Fernandez, but also Stanley, Italian international Davide Gardini, Finnish smarty pants Miki Jauhiainen (no, really; look up his computer science major), to name a few — the group had a big decision to make.

Eschenberg's decision loomed large. A senior academically, the 6-foot-6 native of Newbury Park, California, was halfway toward applying to dental school. Coming back meant plenty of sacrifice to his future.

But "Esch" knows a thing or two about sacrifice.

A former walk-on, Eschenberg practiced on "the dark side" of the court — the one behind the black curtain in the Smith Fieldhouse — for two years before he even made the Cougars' roster. When he finally made the travel squad, Olmstead later demoted him off it for various reasons.

Combined with a two-year break to serve a church mission in Lima, Peru, and Eschenberg's career didn't exactly attract the lights of that of Fernandez.

"He's the ultimate team player," Olmstead said. "He never once complained. Not once did he worry about himself. Not once did he have a gripe or even feel that he was given the short end of things. He continued to grind and grind and grind — and look at him now. You've got to put him in with some of the best outside hitters this season, just with his attacking numbers. I can't even say enough about him or his personality. He's a kid who puts a smile on your face every time you see him, and he doesn't get the shine. But he doesn't care; he and Kennedy are two of the greatest people I know.

"For years and years, I'm going to talk about Zach Eschenberg, being a team player and doing all that he can, without any complaint. He went through the ringer, and he's preserved, and done such a phenomenal job."

But Eschenberg, who earned AVCA All-America honorable mention honors in his first senior season, still has one final goal in sight: he wants to win a championship, even lead his team to one.

BYU will be among the favorites to win a national title this year, though No. 1 Hawaii (9-0) may have something to say about that. But first thing's first for the three-time national champions.

The Cougars can wrap up an MPSF regular-season title following a conference-only season if they win at least one match from UCLA in the season-ending road trip to Los Angeles next month. They'll also clinch it if UCLA (12-4) loses any of its three remaining matches or does not reschedule a March 31 postponement against No. 4 Pepperdine.

Or they can just go take it by winning at Pauley Pavilion next Friday or Saturday.

"I know for this group, that would definitely feel super good," Eschenberg said. "From two years ago to last year … as long as we keep taking it one game at a time and keep improving, hopefully everything we fall into play.

"We're definitely going to be fighting for that championship."

Because after all that these seniors have gone through in four — no, five — years, capping it off with a title would only be fitting.

"That's what we're playing for, right?" Jauhiainen said. "It would mean a lot. Last year, we didn't get to finish it, and we haven't won much. We still have time and we get to earn something."