Fur hunting, egg wars and nuclear waste: A virtual tour of the 'Islands of the Dead' 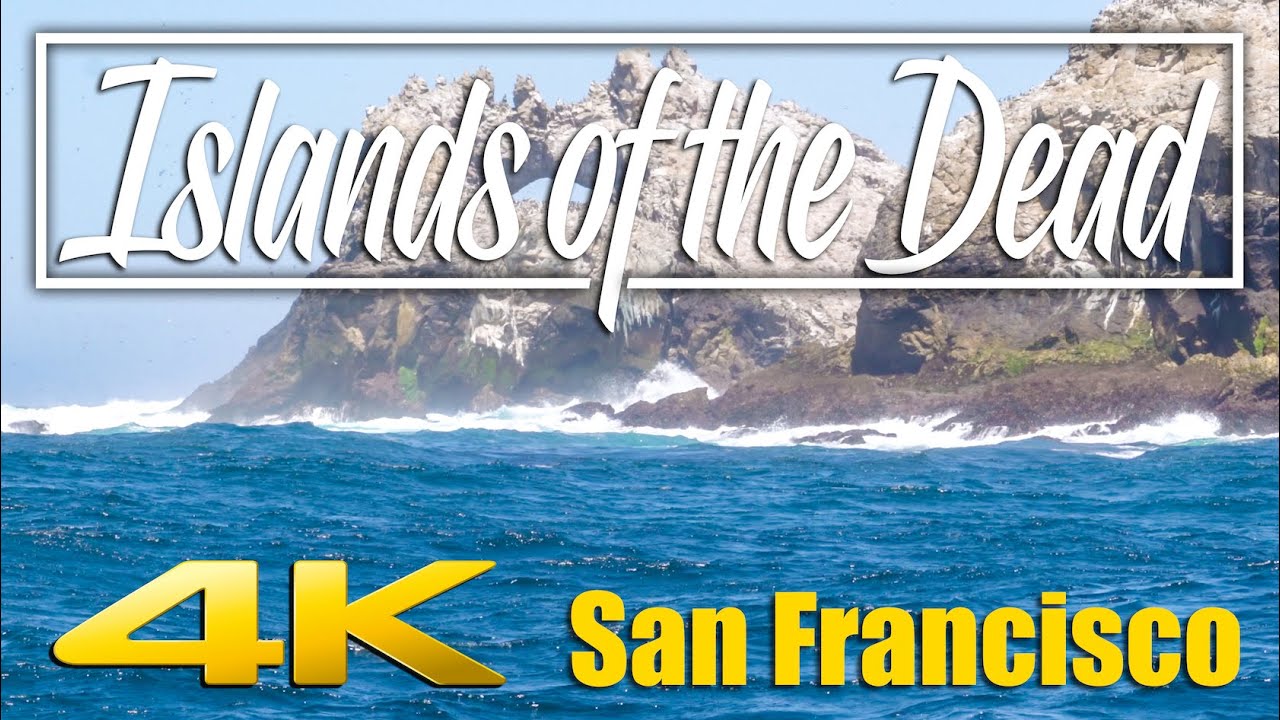 Editor's note: As part of this bizarre narrative, make sure to take a virtual tour of these fascinating islands by watching the included video.

SAN FRANCISCO — Anything but hospitable, the Farallon Islands have earned some ominous nicknames and titles over the years like "the Islands of the dead," "the devil's teeth," and more recently: some of the most dangerous islands in the world. But contrary to their nicknames, the Farallones have a fascinating and thought-provoking story to tell about humanity, nature and their complicated history together.

Situated 28 miles west of San Francisco, these skeletal granite towers are surrounded by turbulent seas, great white sharks, and often ferocious winds, the U.S. Fish and Wildlife Service notes in a brochure. Author Susan Casey, speaking of the Farallones, told Smithsonian magazine, "It's a place where every animal thrives because it's the wildest of the wild, but it's a tough place for humans."

Yet, humans have been drawn to these islands and have fought bitterly over them.

The lure of fur and gold

The story begins in 1579 with Sir Francis Drake and his crew who are believed to be the first humans to intentionally step foot on the islands. Though aware of the islands, Native Americans are not thought to have visited them either out of spiritual reverence or the limitations of their watercraft, according to an article from the San Fransisco Bay Wildlife Refuge Complex.

Long-term occupancy of the islands began in the early 1800s, when American and Russian fur traders killed as many as 50,000 seabirds and 200,000 seals and sea lions seasonally the Golden Gate Audubon Society says. The islands' seal population couldn't long survive those pressures, and by the 1840s the seal colonies were gone. It would take more than a century for species like the endangered northern fur and elephant seals to recolonize the islands, the Farallon Islands National Refuge website says.

In 1848 came the discovery of gold at Sutter's Mill and promoters like Samuel Brannan, a former member of The Church of Jesus Christ of Latter-day Saints and merchant whom the American Experience TV series says walked the streets of San Francisco shouting "Gold! Gold! Gold!" The result was the greatest mass migration to date in United States' history, the catalyst for the collapse of California's unrivaled natural heritage, and a contest that ignited a 30-year war over eggs.

As a consequence of the fervor of the gold rush, 80% of California's native population would be wiped out. Many others would be enslaved and forced to work as miners.

Arguably the grandest forest on Earth, the coastal redwoods — many almost 400 feet tall having survived thousands of years — would be all but lost, according to the National Park Service. In the San Francisco Bay area, only a small grove would survive as Muir Woods National Monument, set aside by President Theodore Roosevelt using the Antiquities Act, the National Park Service says.

Entire rivers and crops were poisoned and choked with mercury and silt, Life Science says; an article from University of California Press notes wildlife numbers collapsed across the state and along the coast; and men killed each other over eggs.

Existing chicken farms couldn't hope to meet the needs of California's booming population and chicken egg prices quickly ballooned to $1.00 an egg in San Francisco, Smithsonian magazine says, and $3 apiece in the goldfields stats from California State Parks show; that's equivalent to $33 and $99 in today's money. With protein in short supply, the hungry masses turned to the million-plus nesting sea birds on the Farallon Islands.

The first couple of men to seek their fortunes by collecting eggs only barely survived their first trip, according to the Smithsonian, and swore to never return to the islands. But the $3,000 payday and demand for eggs proved motivation enough to return. In the years to come, as many as 500,000 eggs gathered from the Farallones were sold seasonally in San Francisco.

Before long rival egg collectors were in violent competition. In an article about the "egg wars," the Smithsonian says brawls, stabbings, and shootouts were commonplace. But in June 1863, following a violent invasion of the main island that left two dead and at least five wounded, the conflict achieved national infamy. The egg war ended with the forced expulsion of commercial eggers in 1881.

After decades of gathering eggs less than a day old and stomping all others, the sea bird population, like the seal population, had collapsed. In 1909, hoping to preserve the island's wildlife, Roosevelt used the powers granted by the Antiquities Act to set aside some of the islands as a sea bird preserve, SFGATE.com notes.

Despite Roosevelt's protections, Golden Gate Audobon Society says commercial vessels routinely dumped waste oil near the islands for decades adding to the already severe damage caused by numerous unintentional oil spills throughout the 20th century. Then between 1946 and 1970, the U.S. Geological Society says the U.S. military dumped 47,800 barrels of nuclear waste in the waters off the islands.

The Gulf of the Farallones is also the resting place for the USS Independence, a World War II aircraft carrier that was among 90 vessels that endured multiple nuclear bomb tests during Operation Crossroads. Popluar Mechanics says the Independence subsequently became a nuclear fallout laboratory before being loaded with nuclear waste and scuttled in secrecy by the U.S. military just south of the Farallones in 1951.

The presence and effects of nuclear waste on the Farallones and the California coast is still very much a concern, USGS says; but despite more than a century of crushing exploitation and abuse, there is a growing flame of hope for the long-term health of the Farallon Islands.

Prior to the California gold rush, an estimated 600,000 common murres (a small penguin-like sea bird) nested seasonally on the Islands. Once the most abundant coastal bird species in California, the audobon society says a 1930 survey found only four common murres on the islands. By 1959, that number had increased to 6,000 (still a paltry 1% of their pre-gold rush presence).

But then came the Environmental Protection Act, The Endangered Species Act, and the 1981 creation of Greater Farallones National Marine Sanctuary (expanded in 2015). What followed has been called "remarkable," by National Geographic, and a "tremendous success," by the fish and wildlife service.

Today, the Farallon Islands are the largest seabird nesting colony south of Alaska. More than 250,000 sea birds nest seasonally on the Islands —199,000 of which are common murres. The seal colonies have begun to return, and with them a whole host of marine life.

While still a far cry from the natural spectacle that greeted Sir Francis Drake in 1579, the Farallon Islands once again play host to a stunning pageant of North American wildlife as seen in this tour video. Following more than a century of conservation efforts, blue, grey, humpback, killer whales, and more are making a comeback in this forgotten and heavily abused corner of the nation.

In addition to kindling hope that America's lost heritage can be resurrected, the Farallones have significant wisdom to offer all Americans, but perhaps especially residents of Utah, which as grown by more than 500,000 people in the last 10 years. That population increase exceeds the first decade of the California gold rush.

But this is not 1849, and Utah is not California, right? True, but that is the concern.

Samuel Brannan campaigned for Latter-day Saints to settle in California, the church's website says. But Brigham Young feared the abundance of California would attract other settlers, the "American Experience" shows, choosing instead to stay in Utah — a land considered by many as barely habitable, and one in which Young hoped might be a sanctuary "nobody else wants," the History Channel says.

It was because Utah, like the Farallones, was comparatively harsh and inhospitable that Mormon pioneers weary from conflict chose to settle the Intermountain West. Nowadays, the Intermountain West and Southwest are home to the fastest-growing populations in the nation, the U.S. Census shows. And there is a real danger that states with rapidly inflating populations may suffer a fate similar to California and the Farallon Islands and see their natural heritage collapse further; further, because unlike California and the Farallones prior to the exploitation of the 1800s, Utah and the West are already struggling with diminished and overstretched natural resources.

Before the sun rose on the first day of spring 2021, Gov. Spencer Cox declared a state of emergency in Utah, citing "extreme drought" conditions. Now, drought is hardly a new challenge for Utahns. But a rapidly expanding population changes the equation substantially, as have the increased recreational pressures on our public lands — a direct consequence of the tourism boom and promotion of the last couple of decades.

Utah's natural resources have been shouldering intense pressures, which are rapidly increasing with the state's booming population. Wise stewardship is as critical as ever. Without prioritizing the health of Utah's natural resources our long-term, prospects look bleak. But if we preserve, conserve and restore Utah's natural resources and facilitate sustainable growth, learning from the troubled history of California and the Farallones, then we'll avoid a pattern of boom and bust, and Utah's future is bright indeed.