TAYLORSVILLE — A Unified police officer who killed an unarmed man, shooting him six times, was not legally justified in using that deadly force.

That conclusion was announced Friday by the Salt Lake County District Attorney's Office. But District Attorney Sim Gill said he will not pursue any criminal charges against United police officer Omar Flores.

"We don't believe a jury would convict officer Flores of murder or another criminal charge," Gill said.

The officer said the man disobeyed orders, the man's hands were moving by his waist and he feared for his life and the life of his partner when he shot him.

Gill released a 24-page decision on Friday, going into great detail about why Flores was mistaken in his reasons for using deadly force, even though he feared for his life. He called it a "challenging case" to review.

On March 21, emergency dispatchers received calls from citizens who heard gunshots in the area of 6200 S. Bangerter Highway followed by a car speeding away. Four officers responded to the call.

While searching the area, the officers came across a car in a park. As officers approached to question the driver, the vehicle began to drive away. When police turned on their emergency lights, the vehicle ran a stop sign and sped away, according to the district attorney's report.

The vehicle crashed a short distance away, near 6300 South and 3200 West, and the driver got out and ran, the report states. Flores spotted the fleeing man, Bryan Ulysses Pena-Valencia, 28, of Salt Lake City, who was climbing a fence to run through a backyard, according to the report.

Flores followed, and investigators believe that while scaling the fence, Flores' body camera was knocked off of his uniform, the report states. Because of that, there is no body camera footage of the shooting.

When Flores confronted Pena-Valencia in the backyard, he twice used his Taser after ordering him to stop, but the Taser had no effect. Pena-Valencia told the officer, "OK, OK, I give up," but still tried to climb a second fence to get away, the report states.

"The man stood, facing officer Flores and was 'motioning toward his waistband.' Officer Flores again told the man to get on the ground, but the man did not comply," according to the report. 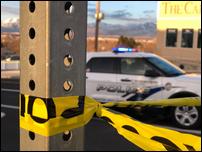 One man is dead Saturday after an officer-involved shooting that occurred in a backyard in Taylorsville.

Pena-Valencia then took something from the pocket of his hoodie and threw it over the fence. It was later determined to be his wallet.

A second officer arrived on scene and both he and Flores stood at a 90-degree angle to confront the man. Pena-Valencia continued to disobey orders to show his hands or get on the ground, "and instead swayed side to side while staring at officer Flores," according to the report.

At one point, Pena-Valencia quickly moved his head, switching his focus from Flores to his partner. Flores said Pena-Valencia's "eyes were wide" and he "immediately felt an overwhelming fear for my partner's life and my own," the report states.

"I thought or believed he was reaching for a firearm and I would be shot. I feared my partner would be shot," Flores told investigators in a written statement.

"The suspect remained standing. The suspect's hands were near the middle of his body, slightly moving down," the officer repeated in his statement. "I felt as if the suspect was either concealing and/or taking a defensive position by moving to his side the way he did and based off his mannerisms. I felt as though the suspect was trying to manipulate me and catch me off guard by being verbally compliant in saying, 'OK. I give up.'"

(The officer) said it seemed like the man was looking 'through" him. (He) said he had seen that look before, sometimes in people with mental health and intoxication issues.

The other officer with Flores, when interviewed for the investigation, said Pena-Valencia had "like a thousand-yard stare."

"(The officer) said it seemed like the man was looking 'through" him. (He) said he had seen that look before, sometimes in people with mental health and intoxication issues," according to the report.

The officer stated that it appeared Pena-Valencia was going through a "thought process," that he was "super defensive" and that "it looked like the man was making a decision." He concurred that Pena-Valencia was "very evasive with his hands," which "weren't up, they weren't out, they were very close to his proximity, his torso, his chest," the report states.

An autopsy determined that Pena-Valencia was shot six times and that his "arms were down and to the side of his body and not raised when he was shot."

In such instances, the officer's mistaken belief about the subject was nevertheless a reasonable mistake because the circumstances supported reasonable inferences such that an objective, reasonable officer would make the same mistake.

Gill said this case is different from other police shootings where a suspect is not armed but still gives an impression that he might be armed by pointing a facsimile of a gun — or another object — at officers, or when a suspect keeps his hands hidden in his pockets, or when a suspect appears to pull something out of his waistband, or when a witness directly tells officers that a suspect is believed to have a gun.

"In such instances, the officer's mistaken belief about the subject was nevertheless a reasonable mistake because the circumstances supported reasonable inferences such that an objective, reasonable officer would make the same mistake," the report states.

But without a set of facts to make reasonable inferences, Gill said an officer may not be justified in shooting someone.

"In this instance, officer Flores cannot — or at least did not — point to a reason why he thought Mr. Valencia had a gun," according to the report.

Flores did not say he saw a gun or part of a gun or items associated with a gun like a holster, the report says. Furthermore, Pena-Valencia never stated he had a gun.

"Indeed, when he was shot, Mr. Valencia didn't even make a drawing motion or act like he was drawing a gun or a weapon from his waistband," the report states.

Gill said that while Flores feared Pena-Valencia was reaching for a gun, he was not drawing or producing a gun.

"Although officer Flores articulated the totality of the circumstances that combined to cause him to believe that Mr. Valencia's actions were intended and designed to do one thing — produce a gun — we're not persuaded that these circumstances were sufficient to make officer Flores' belief reasonable. Therefore, we cannot conclude officer Flores' use of deadly force was justified," according to the report.

Although officer Flores articulated the totality of the circumstances that combined to cause him to believe that Mr. Valencia's actions were intended and designed to do one thing — produce a gun — we're not persuaded that these circumstances were sufficient to make officer Flores' belief reasonable.

There was no evidence that Pena-Valencia was the person involved in the original call they were investigating of shots being fired or that the man had a gun while running from police, the report states.

Gill said in the report that there is also no evidence to suggest that Flores acted with criminal intent. On the contrary, the officer subjectively believed his life and the life of his partner were in danger.

Gill further stated that police officers have a heavy burden to use deadly force both appropriately and only when "absolutely necessary."

After Gill's decision was released, Salt Lake County Sheriff Rosie Rivera issued a statement saying that Flores has been placed on administrative leave and an internal affairs investigation is being conducted.

"In the published findings, the D.A. acknowledged that law enforcement confronts very real dangers and officers are expected to be able to anticipate a threat of death or serious bodily injury. I have faith that our UPD officers take this responsibility seriously and understand that review and investigation of the use of deadly force is a critical part of this responsibility," Rivera said.

"Every use of deadly force incident provides us the opportunity to review and adapt our policies, procedures and training so that we can remain accountable to the public we serve."