CORINNE – The number of people visiting the Spiral Jetty has grown so much that leaders in Box Elder County made an offer Wednesday to purchase about 10 acres of land to add amenities to the site.

Commissioners said they need to update the area to catch up with the growing crowds.

The Spiral Jetty is a piece of art located off Rozel Point in the north arm of the Great Salt Lake that draws people from all over.

During the spring and summer months, thanks to the pandemic, people constantly showed up by the dozens.

"You know, we were having 60 to 100 cars an hour on weekends. It was getting to the point that it was a steady line of cars," said Box Elder County Commissioner Stan Summers.

He said the area kind of blew up, much like just about any other tourist attraction in Utah. With nothing but a small parking lot, it wasn't prepared for the large numbers.

"There's really not a good spot out there to do anything. So yeah, we'd like to have some good amenities so people can go out and actually – if they have to use the bathroom," Summers added.

This is all about keeping the area clean and keeping cars off the brush. The county already paid for the toilets and has about $10,000 to spend on land out there.

If everything goes as planned, expect the upgrades to start showing up in the area toward the end of this summer. 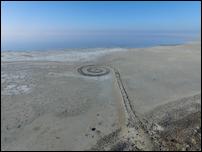 If you ever take the long journey to visit what is arguably Utah's most famous artwork, there are a few things it might be useful to take along for the ride.

Summers added that visitation has also spiked at Devil's Playground, which is even further out on the west end of Box Elder County.

The county already bought land out there with very similar plans.