SALT LAKE CITY —A digital transformative and abolition criminology conference co-hosted by Salt Lake Community College and the University of Utah was hacked Friday by a group of individuals who displayed anti-Black and sexually explicit language as well as inappropriate pictures of children.

The hack comes just two weeks after a virtual poetry slam that was part of Black History Month events was similarly infiltrated.

According to SLCC Chief Diversity Officer Dr. Lea Lani Kinikini, the national conference was inundated with approximately 20 individuals who displayed inappropriate pictures of children, as well as broadcasted audio saying "white lives matter" and "all lives matter." Additionally, the group continually used racial slurs and anti-Black language leading Kinikini and other attendees to presume it was a group of white supremacists. 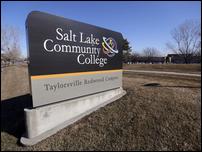 A virtual poetry slam that was part of Black History Month events at Salt Lake Community College was commandeered on Thursday by unknown individuals who displayed racist and anti-Black messages as well as inappropriate images of children.

The hackers called out the names of students present as well as faculty. Kinikini said that the students believe the hackers were nearby and presented a threat.

"Students reported feeling intense fear for their physical safety. They do not feel safe on an online cyber environment," said Kinikini. "It's gutting."

According to Kinikini, some of the attendees and faculty believe it was the same group who infiltrated the poetry slam held by the Black Student Union on Feb. 5, due to the similarity of the messages and events. Kinikini said she feels the events are being racially profiled and targeted.

The actions of the group meet the threshold of a hate crime, according to Kinikini. Specifically, Utah Code 76-3, which states it's criminal for someone to intimidate or terrorize an individual or group.

Intimidate and terrorize is defined as "an act which causes the person to fear for his physical safety or damages the property of that person or another. The act must be accompanied with the intent to cause or has the effect of causing a person to reasonably fear to freely exercise or enjoy any right secured by the Constitution or laws of the state or by the Constitution or laws of the United States."

Ashley Fredde
Ashley Fredde covers human services and and women's issues for KSL.com. She also enjoys reporting on arts, culture and entertainment news. She's a graduate of the University of Arizona.