SALT LAKE CITY — Utah lawmakers say drought and the dwindling Colorado River make it more important than ever for the state to act now to safeguard its interest in the river.

A bill to set up the Colorado River Authority of Utah passed the House 61-12 Tuesday and will be taken up by a Senate committee for further consideration.

Sponsored by House Speaker Brad Wilson, R-Kaysville, HB297 sets up the authority made up of representatives from major water districts in the state, as well as the Colorado River commissioner representing Utah.

Wilson said Utah uses just 54% of its allocation from the river, which had its water divvied up among seven states in a compact nearly 100 years ago.

That unused water, he said, needs to be safeguarded now, especially as flows have decreased.

"There's good probability there will be less water out of the Colorado River," Wilson said. "That makes this work even that much more important. Our ability to have water in this state is going to be critical for our children and grandchildren."

Many of his colleagues agreed.

"We need to get on with this," said Rep. Carl Albrecht, R-Richfield. "We are behind the curve and behind the eight ball."

Rep. Brady Brammer, R-Highland, said he worked as an attorney at a Southern California law firm widely regarded as the law firm with the most expertise on water issues, and even back in 2008, attorneys were strategizing on how to protect that state's Colorado River water. 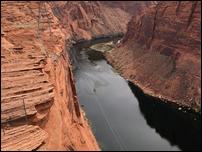 Utah 'behind the times' and needs watchdog to guard interest in Colorado River, official says

Utah House Speaker Brad Wilson says the state needs to do everything it can to protect its share of water in the drought-challenged Colorado River, and the creation of a new entity would foster that protection.

"We can come out of this protecting our future. We have all known for a long time the water of Utah dictates the future of Utah," he said.

Wilson has repeatedly emphasized that other states that rely on Colorado River water have already set up similar entities to safeguard their rights and are prepared to act if for some reason the Colorado River Compact should ever be renegotiated.

Critics say the new entity, with a one-time price tag of $9 million, is a ruse to promote development of the Lake Powell Pipeline to serve residents in Washington County, but Wilson insists the two issues should be divorced.

The authority's primary purpose, he has insisted, is to safeguard the state's Colorado River water, not to promote development of projects or to take water from other states.

Rep. Joel Briscoe, D-Salt Lake City, voted against the measure, objecting to the authority's proposed makeup of only appointed officials that aren't accountable to Utah voters.