OREM — An undercover officer involved in a sting at four massage parlors was told that if he just wanted a regular massage and not sexual activity, he would need to go someplace else, according to prosecutors.

On Wednesday, the Utah County Attorney's Office began charging those arrested in a large raid of massage parlors in Orem and American Fork that police say were fronts for human trafficking and prostitution.

Jing Wang, 34, and Xiaoxia Liu, 60, both of Chicago, were charged with human trafficking, engaging in a pattern of unlawful activity and money laundering, second-degree felonies; plus tampering with a witness, a third-degree felony.

Ju Ying Wang, 56, of Lindon, was also charged with engaging in a pattern of unlawful activity, a second-degree felony; and prostitution, a class B misdemeanor.

The charges follow the raids by multiple law enforcement agencies on two massage parlors in Orem, two in American Fork, and at a home in Lindon on Feb. 4, plus a follow-up investigation that led to three arrests at the Salt Lake City International Airport the next day of group members who investigators suspect were trying to send a victim of human trafficking to Chicago to continue her work.

At the Sunflower massage, undercover officers were offered sex acts in exchange for money on multiple occasions, charging documents state. One woman told police she was "just recently was transferred from Boise, Idaho, to Sunflower massage." 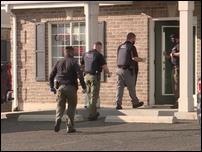 Six people were arrested Thursday following an investigation into massage parlors in Utah County that police say were fronts for human trafficking and prostitution.

One man who was arrested was seen by police providing transportation to massage workers each day. That man claimed he met one of the women in Michigan and married her before bringing her to Utah, "but did not know she was involved in illegal activity" and further claimed that because she "only speaks Chinese and he only speaks English ... he does not know what she does," according to the charges.

At Small Rainbow, another undercover officer reported that he was also offered sex acts in exchange for money. When the officer declined, the woman told him that she does not get paid for regular massages, but only when she performs acts, according to the charges. She told the officer, "Next time if you only want a massage you go somewhere else," the charges state.

The undercover officer repeated her comment and clarified that he was not to return if he did not want a sex act, to which the woman nodded her head to say yes, according to the charges.

At least four people were found to also be living at Small Rainbow, the charges say, and during a search of that massage parlor, "officers located $14,776 in U.S. currency and $11,000 in Korean currency."

Similar undercover operations with the same results were conducted at Relax Wood, where police also kept surveillance on women who were transferred to and from a Lindon home each day, according to the court documents. Police say more than $35,000 cash was seized from that business.

At Magic Massage, police found a woman who was flown to Utah from Chicago just three weeks earlier and told investigators "that she lives where she is told to live," the charges state. The woman also said "that she owes money in China and this is the only way for her to work" and "that she gets paid by the 'boss' to do massages."

The woman also told police that she feared harm would come to her son and husband, who are still in China, if she did not do what the organization's bosses told her, and that she would bring her family "great shame" if it was revealed what she was doing.

The charges indicate that Xiao Ling Wang, 42, of American Fork, was the woman's boss and after her arrest, helped to arrange for the woman to be returned to Chicago.

According to a police affidavit, Liu was also referred to as "boss" by at least one other worker.