With some Republicans on board, US House presses forward on impeachment vote 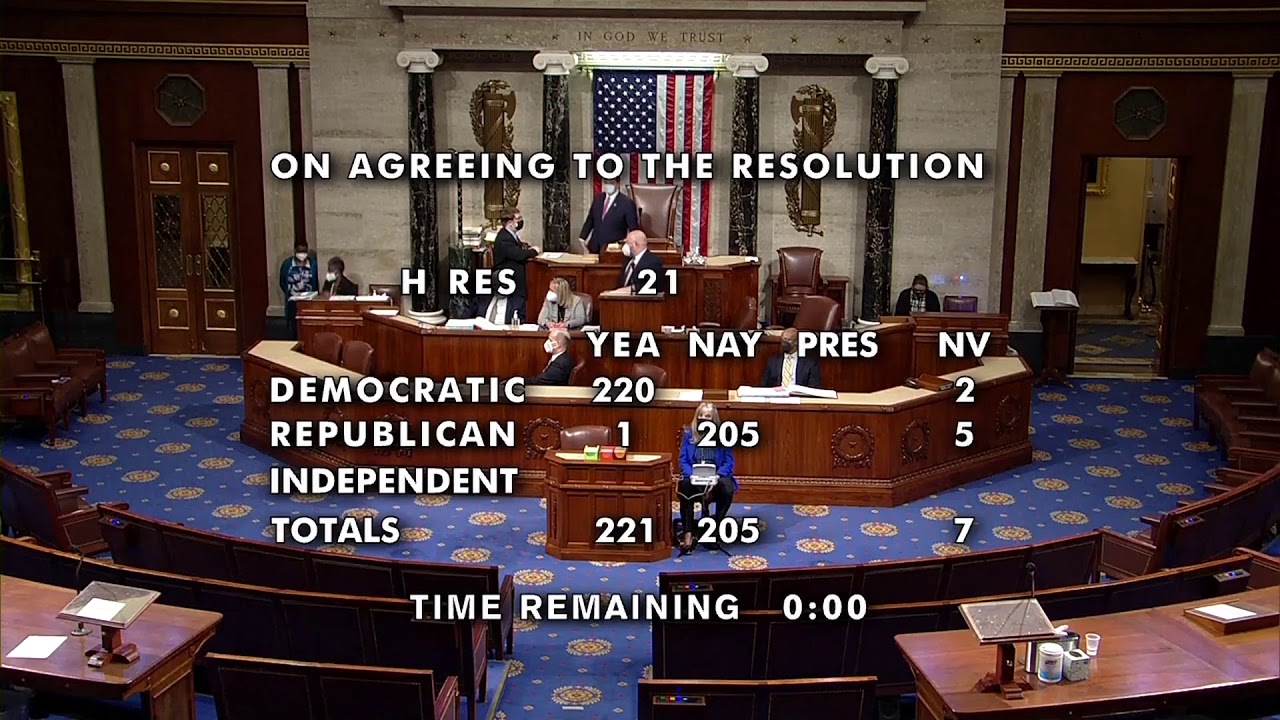 WASHINGTON (Reuters) — With at least five Republicans joining their push to impeach President Donald Trump over the storming of the U.S. Capitol, Democrats in the House of Representatives stood poised for a history-making vote to try to remove the president from office.

With eight days remaining in Trump's term in office, the House of Representatives is poised to pass an article of impeachment on Wednesday accusing the Republican of inciting insurrection in a speech to his followers last week before a mob of them stormed the Capitol, leaving five dead.

That would trigger a trial in the still Republican-controlled Senate, although it was unclear whether enough time or political appetite remained to expel Trump.

Democrats moved forward on an impeachment vote after an effort to persuade Vice President Mike Pence to invoke the 25th Amendment of the U.S. Constitution to remove Trump was rejected by Pence on Tuesday evening.

"I do not believe that such a course of action is in the best interest of our Nation or consistent with our Constitution," Pence said in a letter to House Speaker Nancy Pelosi.

Despite the letter, the House passed a resolution formally calling on Pence to act. The final vote was 223-205 in favor.

While that was occurring, Trump's iron grip on his party was showing further signs of slipping as at least four Republicans, including a member of the House leadership, said they would vote for his second impeachment — a prospect no president before Trump has faced.

Representative Liz Cheney, the No. 3 House Republican, said: "There has never been a greater betrayal by a President of the United States of his office and his oath to the Constitution."

Trump "summoned this mob, assembled the mob, and lit the flame of this attack" on the Capitol last Wednesday, Cheney, the daughter of former Republican Vice President Dick Cheney, said in a statement, adding: "I will vote to impeach the president."

Republican leaders in the House did not urge their members to vote against impeaching Trump, saying it was a matter of individual conscience.

In his first public appearance since last Wednesday's riot, Trump showed no contrition on Tuesday for his speech, in which he repeated his false claim that President-elect Joe Biden's victory was illegitimate. Biden will be sworn in as president on Jan. 20.

"What I said was totally appropriate," Trump told reporters as he left for a trip to the U.S.-Mexico border wall near Alamo, Texas, his first public foray since the assault on the Capitol.

At a meeting to set the rules for Wednesday's impeachment vote, Democratic Rep, David Cicilline told the House Rules Committee that the impeachment drive had the support of 217 lawmakers — enough to impeach Trump.

Cicilline, who helped craft the impeachment measure, said Trump "has had almost a week to do the right thing. He has refused to resign, he has failed to take responsibility, he has demonstrated no remorse."

House Republicans who opposed the impeachment drive argued Democrats were going too far, as Trump was on the verge of leaving office.

"This is scary where this goes, because this is about more than about impeaching the president of the United States. This is about canceling the president and canceling all the people you guys disagree with," said Rep. Representative Jim Jordan, a leading Trump ally when the president was impeached in 2019 after encouraging the government of Ukraine to dig up political dirt on Biden.

The New York Times reported that the Republican majority leader of the U.S. Senate, Mitch McConnell, was said to be pleased about the Democratic impeachment push, suggesting Trump's party was looking to move on from him after last week's stunning attack on Congress.

McConnell believes the impeachment effort will make it easier to purge Trump from the party, the Times said.

If Trump is impeached by the House, he would have a trial in the Senate to determine his guilt. A two-thirds majority of the Senate is needed to convict him, meaning at least 17 Republicans in the 100-member chamber would have to vote for conviction.

Trump denies any responsibility for his supporters' Congress attack

U.S. President Donald Trump, facing impeachment on a charge of "incitement of insurrection" on Tuesday denied responsibility for his supporters' violent invasion of the U.S. Capitol last week and said his remarks before the siege were appropriate.

"I don't think you would have a hard time finding 17 Republicans to convict" with a tightly drawn article of impeachment, a former Senate Republican leadership aide told Reuters. "I think for McConnell, there's a very strong impulse for this (the Capitol assault) not to define the party."

Pelosi on Tuesday named nine impeachment "managers," who would present the House's case for impeachment during a Senate trial, but it remained unclear how swiftly such a trial would take place if the House votes to impeach.

McConnell has said no trial could begin until the chamber returns from its recess on Jan. 19.

But Democratic Minority Leader Chuck Schumer, who is set to become the majority leader after two Democrats from Georgia are seated and Vice President-elect Kamala Harris is sworn in, told reporters the Senate could be recalled to handle the matter.

Democrats could also use an impeachment trial to push through a vote blocking Trump from running for office again.

Rather than a two-thirds vote, a simple Senate majority is needed to disqualify Trump from future office. There is disagreement among legal experts as to whether a conviction on an impeachment charge would be needed before a disqualification vote. A different part of the Constitution, the 14th Amendment, also provides a procedure for disqualifying Trump from future office with a simple majority of both chambers.