A long career in public service

Gov. Gary Herbert is the longest-serving governor in Utah's history, announcing he would retire in early 2019.

Herbert will officially step down Monday, as his Lt. Gov. Spencer Cox takes his place. Cox won the general election against Democratic opponent Chris Peterson with 63% of the vote.

"I stand today to honor my friend, Gary Herbert, governor of the state of Utah for the last 12 years," Sen. Mike Lee said in his Senate floor speech. "Who after a long career in public service is now embarking on a really well-deserved, hard-earned retirement."

@SenMikeLee payed tribute to @GovHerbert today on the floor of the United States Senate. We couldn't have said it better. Governor Herbert, thank you for your service. We wish you every good fortune in your future. #utpolhttps://t.co/XUhNgNOrHA

Herbert took office in 2009 amid the economic strain of the Great Recession, ending his gubernatorial career with the COVID-19 pandemic, a summer of social justice protests and another national economic crisis.

He offered really sound and heartfelt advice about the importance of staying grounded as we were entering the political fray.

Before that, he served as the lieutenant governor alongside former-Gov. Jon Huntsman, Jr., who stepped down as governor to serve as the U.S. ambassador to China under then-President Barack Obama in 2009. 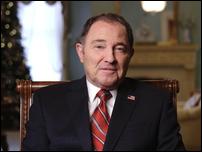 Outgoing Utah Gov. Gary Herbert gave his final speech as governor on Monday in a pre-recorded video, urging Utahns to "work together in a spirit of common decency and mutual respect" and reject political divisiveness tugging at the state's and nation's seams amid a time of crisis.

"Gary came in and provided us all with a warm welcome," Lee recalled. "But he didn't stop at the welcome. He offered really sound and heartfelt advice about the importance of staying grounded as we were entering the political fray. He explained that long after our service in the Huntsman-Herbert administration that expired, we would want to be able to look back and be pleased about the relationships that we had formed with each other — but especially the relationships that we had maintained with our families, our children and God."

Lee praised Herbert for his dedication through more than a decade of work, particularly through bridging gaps and solving problems. He also hailed his support of Utah's family culture and his "textualism" through judges who interpret the law "based on what the law says rather than on the basis of what it might have said."

"It's been an honor to serve the people of Utah with him," the senator said. "I wish Gov. Herbert and his wife, Jeanette, all the best as they embark on the next chapter of their lives together."