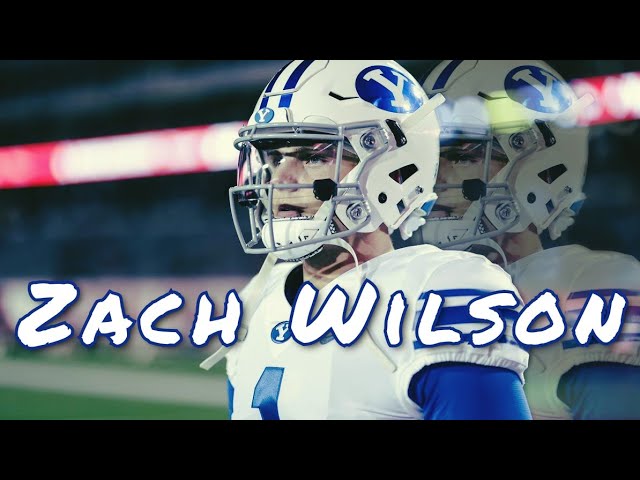 PROVO — After a wild ride through the 2020 season and a whirlwind three years in Provo, BYU quarterback Zach Wilson has made his decision.

The 6-foot-3, 210-pound product from Corner Canyon High School is officially headed to the NFL.

Wilson made his decision Friday and announced it on social media, a moment that has long been expected since the Cougars' QB1 took the college football season by storm in 2020.

He also thanked "the greatest fan base in the world" at BYU.

"Thank you for the best three years of my life," Wilson wrote. "On our own home turf, or on the road, there was no question that the Blue Wave would be fierce. BYU is a special place. I'm forever blue.

"To all my boys on the team and everyone else involved in my time here: Without you, I am nothing. You never forget the ones that went to battle with you; they are a part of you forever. Forever grateful to my line and receivers. The strength staff and training staff for their endless dedication to me."

The junior is the sixth Utah high school football product to declare early for the 2021 draft, joining Stanford's Simi Fehoko (Brighton), USC's Jay Tufele (Bingham), Oregon's Penei Sewell (Desert Hills), Bingham's Dax Milne (BYU) and his left tackle at BYU, Brady Christensen (Bountiful). The last one is probably the most important for Wilson, who will follow his trusted tackle like he did his entire BYU career — including the 11-win 2020 season.

Wilson capped his junior season with 3,692 yards and 33 touchdowns with just three interceptions, pacing the Cougars to an 11-1 season with a performance that finishes just outside the top-10 in passing yardage in school history (Robbie Bosco ranks No. 10 with his 3,874 yards in 1984).

He ran away from the single-season passing accuracy record, completing 74% of his passes to top Steve Young's previous record of 71% set in 1983. (He also set a new career pass efficiency rating record of 162.91, a mark that stood since Detmer posted a 162.74 during his career).

Wilson finished eighth nationally in the Heisman Trophy balloting, a top-10 mark that is BYU's best finish since Ty Detmer's runner-up season in 1991.

Detmer. Bosco. Young. Jim McMahon. John Beck. All have passed their way into BYU's mystique of a quarterback, and Wilson was mentioned in the same breath as each of them on different occasions.

In three years at BYU, Wilson completed 68% of his passes for 7,652 yards and 56 touchdowns with just 15 interceptions. Nine of those picks came in 2019, when he struggled through multiple injuries as a sophomore including to his shoulder and thumb.

He also ran for 642 yards and added 15 touchdowns on the ground. He only lost three fumbles during his entire career, all of them in 2019.

Wilson ended his career with a brilliant showing in the Boca Raton Bowl, a 49-23 win over UCF — a team that entered the game with one of the top offenses in the country, led by rising sophomore quarterback Dillon Gabriel.

But the Corner Canyon product out-played his counterpart from Hawaii, whose father Garrett Gabriel beat Detmer and the Cougars twice during the former Heisman Trophy winner's standout career. Wilson completed 26 passes for 425 yards and three touchdowns, including a pair of scores to reliable freshman tight end Isaac Rex and a miracle throw to Neil Pau'u.

Wilson turned each of his receivers into lethal weapons, led by former walk-on Dax Milne, who caught 70 passes for 1,188 yards and eight touchdowns to become BYU's first 1,000-yard receiver in close to a decade.

A season that was previously in jeopardy of being played, with as few as two opponents on the pandemic-stricken schedule as late as August, turned into an 11-win tour de force — the Cougars' best fall since 2009 or 2001 or even 1996, depending on who you ask (or which metric you use).

But the numbers aren't what Wilson will remember about his 2020 team. Like the t-shirts they wore during warmups, he'll remember the "love" they had for each other.

"The excitement that we had to play this game was special," Wilson said. "Just looking around and soaking it all in was the coolest part. We'll never have the same team again, with guys taking off next year, and things are always different.

"I love these guys, and that was the best part is that we came out with that excitement and energy, and guys were excited to play."

Wilson had a brilliant career, too. He won his first start as a freshman in 2018 to help BYU to a 7-6 season, capped by a perfect passing performance against Western Michigan in the Famous Idaho Potato Bowl.

A year later, Wilson struggled through multiple injuries — namely his shoulder and thumb — before rallying BYU to another 7-6 season. But the son of former Utah defensive lineman Mike Wilson saved his best season for last, as he is expected to declare for the 2021 NFL Draft in the coming days.

Facing a season where all but two of the Cougars' games were canceled due to the coronavirus pandemic, Wilson went on a barnstorming spree against Group of Five football broadcast on ESPN. Instead of facing the likes of Utah, Arizona State, Michigan State, and Missouri, he put up gaudy numbers against a group that included Navy, Troy, Louisiana Tech and Houston, to name a few.

He spurred BYU to its first-ever win on the Blue Turf in Boise, where he was once committed to play, throwing for 360 yards and three touchdowns in a 51-17 win over the then-No. 21 Broncos and propelled his team as high as No. 8 in the Associated Press Top 25.

Instead of coming back for a 2021 season that is scheduled to open Sept. 2 against Arizona in Las Vegas — and features six Power Five opponents, including former BYU coach Bronco Mendenhall's return to Provo with Virginia on Oct. 30 — Wilson will take his talents to the NFL.

He's projected to be one of the first five quarterbacks selected by most draft analysts, a hop behind presumed No. 1 pick Trevor Lawrence of Clemson and mixed in with a group that includes Ohio State's Justin Fields, Alabama's Mac Jones, Florida's Kyle Trask and North Dakota State's Trey Lance.