Driver describes slowing traffic before plane's emergency landing on I-80

SALT LAKE CITY – The quick actions of a small plane pilot in the air and a driver on Interstate 80 may have saved a couple of lives last weekend.

The pilot, Jackson Walker, credited the driver who helped clear cars from I-80, creating an improvised landing strip for the plane.

Paul Jessop said he was driving on I-80 Saturday night near Park City, a little distracted.

"I admit, I was fiddling with my phone, like a bad boy, and I felt an impression, just a really rapid impression," he said.

Jessop said something told him to pay attention.

"I just threw my phone down to the side in the passenger seat and as soon as I looked up and got reoriented, I saw his plane banking as high as a tall tree," he said.

At nearly the same time in the air, Chase Dalton was watching from the passenger seat inside the plane. He reminded his good friend Walker to recall his training and he immediately went to work.

"There was that one moment of panic, where he just said, 'Oh my gosh.' I do give credit to where it's due. I do believe there was a lot of divine intervention," Dalton said.

Being near the freeway at the right time, having the altitude to glide down, a lot of things fell into place.

"When he came over, I just knew he was in trouble," Jessop said.

There's too many coincidences for me to say that we're just lucky.

Jessop said he immediately turned on his hazard lights and started weaving between the lanes to slow the traffic behind him.

"And with that hole that was starting to build, he just dropped in like a fighter pilot. I was so excited I tell ya," Jessop added.

After the aircraft landed Jessop ran over to the plane.

"He leans back and opens his door and I said, 'That was awesome! You did it! You can get out now," said Jessop. 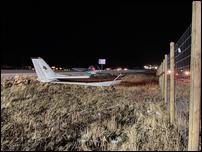 Driver describes slowing traffic before plane's emergency landing on I-80

After its engine failed, a small passenger plane was forced to make an emergency landing on the I-80 freeway near Jeremy Ranch Saturday evening.

Both Jessop and Dalton have a lot of praise for Walker's piloting skills, but they admitted a lot of things just fell into place at the right time.

"Somehow, everything happened correctly and happened right. And that's where we have a lot of credit to give, to God I think. There's too many coincidences for me to say that we're just lucky," Dalton said.

Dalton said it was his first time ever in a small plane. He does not think he will get in one again, nor will his wife let him.