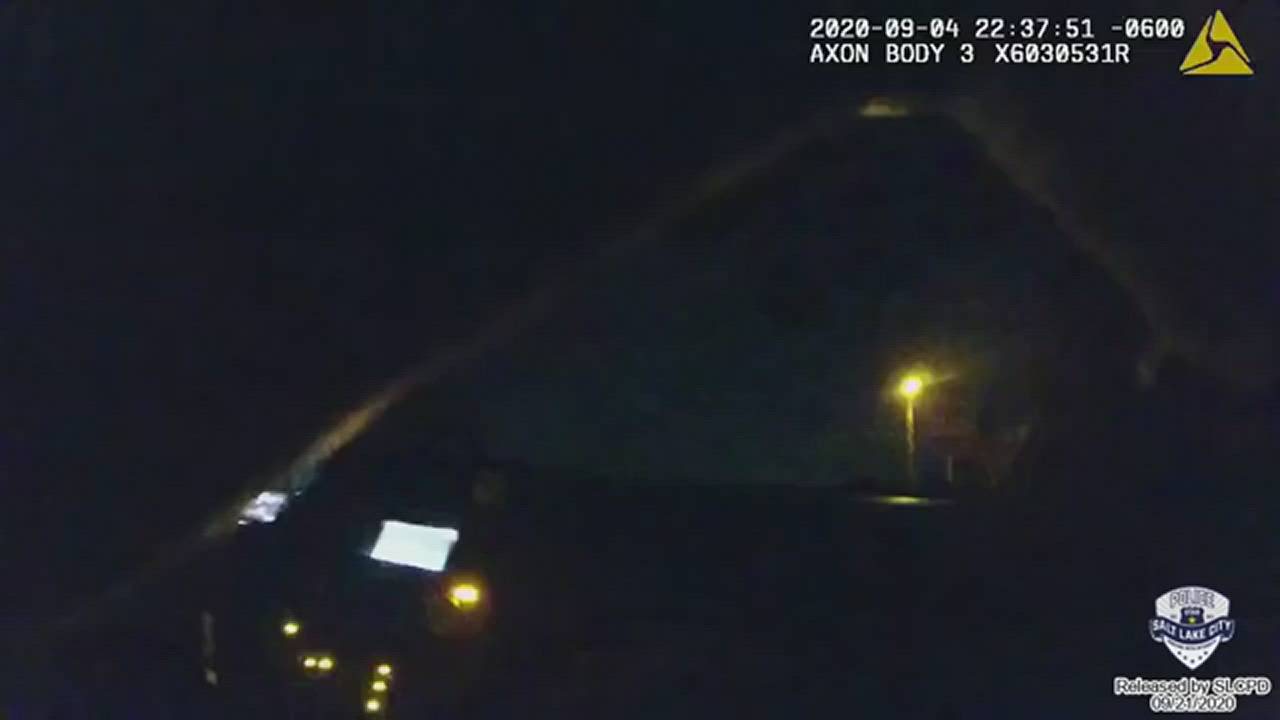 SALT LAKE CITY — “I don’t feel good,” 13-year-old Linden Cameron can be heard saying as he lies on the ground shortly after being shot by police.

On Monday, Salt Lake police released the body camera videos from the three main officers who responded to the call of a young autistic boy having a mental health breakdown, as well as video from a fourth backup officer and 911 calls placed to police by Linden’s mother, Golda Barton.

The videos show that after Barton explained to the officers that her son is afraid of police, doesn’t like officers and would likely try to run, the officers yelled and chased after the boy — even breaking through a wooden fence at one point — before 11 shots are fired by one officer.

Linden survived the shooting. But the incident has garnered national attention and prompted many to question why police used deadly force against a 13-year-old boy with Asperger’s syndrome.

Before the officers walked up to Linden’s house, one of the three officers present, a woman, is heard questioning whether they should approach the house if no one else inside is in danger, and even suggests calling their sergeant and getting another opinion on how department policy calls for handling the situation.

“If it’s a psych problem and (the mom) is out of the house, I don’t see why we should even approach, in my opinion. ... I’m not about to get in a shooting because (the boy) is upset, sorry,” the officer is heard saying on her body camera.

“Especially when he hates cops,” an officer replies.

“Yeah, if no one is in the house, no one is in danger ... sorry, I’m not about to get in a shooting. Especially if he’s fleeing from us and throwing guns out the window,” she said.

Both Salt Lake City Police Chief Mike Brown and Salt Lake City Mayor Erin Mendenhall read brief prepared statements Monday regarding the release of the body camera footage. Although neither would directly address what is shown in the videos due to multiple ongoing investigations, both said the video has had an impact on them.

“I am very saddened by this situation,” the chief said. “And as a father of three young sons, this has had a big impact on me personally.”

“As a member of this community and the mother of a 14-year-old boy, I am profoundly heartbroken and I am frustrated,” Mendenhall added. “This shooting is another tragedy.”

On Sept. 4, police were called by Linden’s mother to the area of 500 South and Navajo Street (1335 West). According to police, officers responded to a report of a juvenile having a “violent psychological issue.”

In the 911 call, Barton immediately asks for a Crisis Intervention Team member to respond. She then tells dispatchers that Linden has had violent tendencies in the past and on this night had possibly threatened to shoot one of her co-workers.

When officers arrived at the scene, they met with Barton who had parked down the street from her house. She again explained how her son would likely have an adverse reaction to seeing a police officer in uniform.

“He reacts to the outfits and everything like that,” she said. “He sees a badge and he automatically thinks, like, you’re going to kill him or he has to defend himself.”

Part of that reaction was due to Linden’s grandfather being shot and killed by police in January in Lyon County, Nevada. Sheriff’s deputies shot Owen Barton after he allegedly threatened a neighbor with a gun, according to news reports out of Reno.

The mother also claimed her son had previously been in another violent confrontation with police in another jurisdiction. Furthermore, she said Linden was having separation anxiety on that day, as Barton had gone back to work for the first time in awhile, which apparently upset Linden.

“I need him to go to hospital,” a fatigued Barton tells the officers. “I cannot do this every night.”

When asked if Linden has access to guns in the house or is armed, Barton said she didn’t believe so, but noted he may have a fake gun.

“But you don’t know if it’s a real gun either?” the officer asks.

“So unfortunately we have to treat them all like they are (real),” the officer tells her, noting they have to worry about officer safety.

Barton expressed frustration with the situation with her son and told a police dispatcher he is “sick” and she would like him taken to Primary Children’s Hospital so he can receive help. She said she believes her new renters were in the upstairs portion of the house, but were not aware of the situation.

The videos then show the officers walking toward the house. Two officers go to the front door and the third remains in the driveway.

According to a statement from Salt Lake police on Monday, after the officers started walking toward the house, Barton called 911 again to try and tell the officers to go to the back door because she was afraid her son would try and run.

“This information was put into the dispatch log approximately one minute prior to officers indicating the son was running from them. The request to go to the back door was never broadcast by the dispatcher, so the three initial officers were unaware of this request,” according to police.

As two officers at the front knocked on the door, the officer in the driveway yelled that someone was in the backyard.

“Police. Stop running!” the officer yells at the boy.

At one point, Linden can be heard telling the officer “No,” as he scales a wooden fence.

At another point as an officer is running after Linden, he appears to tell the officer, “I have a gun.”

As police chase the boy down an alley, they can be heard yelling commands such as, “Stop! Get on the ground! Knock it off!” and “On the ground, now!”

Police originally said on the night of the incident that after the shooting, no other weapons were recovered from the scene. His family says he was not armed.

When asked Monday whether she believes the officers had any reason to use deadly force, Barton’s answer was a resounding “no.”

“No. No! Not at all, not at all. No. No,” said Barton, who said she can’t, and won’t, bring herself to watch the body cam footage that shows her young son topple over after being shot.

According to his family, he was shot multiple times and suffered “injuries to his shoulder, both ankles, intestines and bladder.”

On a GoFundMe page* set up to help pay for medical bills, Barton’s last update was on Sept. 12.

“Linden has a strong spirit and making progress every day. A long way to go still. We are so thankful for all of the communities outpouring of love and support,” she posted.

After the shooting, Barton questioned why police resorted to using their guns.

“It’s like giants against a tiny little kid. I said, ‘Just grab him and tackle him.’ Why didn’t they just tackle him or anything else? Or tase him? Or bean bag hit him? Or just wait ... wait for him to just chill?”

According to Salt Lake police, all new officers are required to attend the 40-hour Crisis Intervention Training course that covers “mental health issues and its relation to police work.” Police have not said whether the officers who responded that night had received that training.

The officer who shot the boy remained on paid administrative leave on Monday. Three separate investigations will now be conducted over the officer’s use of deadly force.

On Monday, Barton met with Brown and other city officials who offered their condolences. But she said the meeting was full of “hollow words.”

“The point is, they don’t understand,” she said. “It’s almost like if you get caught doing something wrong then suddenly you feel so bad.”

“I want to be clear about my expectation that the district attorney’s office, the Civilian Review Board and that the internal affairs here do their work thoroughly and quickly,” Mendenhall said of the reviews.

Although Brown could not discuss the case, he said his department will analyze the situation through the “lens of learning” and make the necessary changes.

The chief also noted that in too many cases, police are called to deal with difficult scenarios that are not criminal in nature.

“We are facing a mental health crisis in this country, with a void of resources for those in crisis. And make no mistake, this is a crisis,” Brown said.

Mendenhall called the shooting a tragedy for the young boy, his mother and families that have acute mental health needs.

The mayor also noted that from now on, all body camera video from officers involved in critical incidents will be released on the police department’s social media pages and public websites. Before, the police department would show those videos to the media during a press conference within 10 days and then require a public records request for copies to be handed out to individuals.

Mendenhall called such requests “unnecessary obstacles” for records that the public should already be allowed to have, and said the new policy shift reflects her commitment for transparency.

“We are at the beginning of an evolution in the way our city addresses public safety. And through this work, we will live in a different Salt Lake City that is more safe for its residents and for the officers who serve and protect them. This is not a mutually exclusive endeavor.”

*Disclaimer: KSL.com has not verified the accuracy of the information provided with respect to the account nor does KSL.com assure that the monies deposited will be applied for the benefit of the persons named as beneficiaries. If you are considering a deposit or donation you should consult your own advisers and otherwise proceed at your own risk.