SALT LAKE CITY — “We’ve taken our streets back and it’s safe to be in Salt Lake City.”

That was the message Wednesday from U.S. Attorney for Utah John Huber who denounced the “outlaws and extremists” who caused widespread destruction in downtown Salt Lake City and injured dozens of police officers last weekend, as he warned the public that citizens cannot straddle the line of lawlessness and order.

“Both of our feet must be surely planted on the side of law and order, for there is no justification, no excuse, for the violence and destruction of property we saw,” he said. “This is a land of law and order. Not of anarchy. Not of lawlessness.”

Four of Utah’s top cops joined Huber in front of the damaged Salt Lake City Public Safety Building to denounce the recent violence while announcing that a federal charge has been filed against a Salt Lake man accused of setting a police car on fire during the riots.

On Monday night, Newbins was credited with helping defuse a tense standoff between protesters and police by using a megaphone to encourage the crowd that had gathered to go home peacefully.

But according to charging documents, Newbins was seen Saturday in video surveillance standing on top of the overturned patrol car, and was later seen “running toward the patrol vehicle from the rear” and throwing “what appears to be combustible material into the flames, which appeared to act as kindling increasing the flames.”

That Salt Lake police patrol car was at 400 South near 200 East when protesters flipped it onto its hood and eventually set it ablaze.

“This police squad car was abandoned after people in the protest stopped the officer driving in the area by blocking the road and the vehicle’s path. The crowd was becoming increasingly hostile toward the officer in the vehicle, causing the officer to run away from the crowd, leaving the car behind,” according to a police affidavit. 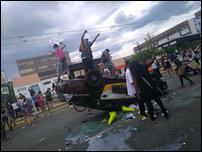 A man who said he helped flip over a Salt Lake police police patrol car on Saturday has turned himself in.

Brown said that female officer was responding to a call that was not related to the protesters or the riot when she became pinned by protesters.

“We had to go in with our officers and rescue her out of that car,” Brown said, stating that other officers had to literally grab her and pull her from the crowd.

Brown estimated a dozen Salt Lake police vehicles were damaged. One of those vehicles, a marked patrol SUV that was heavily damaged with a shattered windshield, broken windows and numerous large dents, was parked in front of the police department during Wednesday’s press conference to show the damage. The public safety building itself still has shattered panes of plexiglass from having large objects thrown through them.

“I’ve done this 30 years … and what we saw last Saturday, I have never seen in my career. I don’t think we’ve ever seen that type of violence and disruption on the streets of Salt Lake City. Look at our building, these windows. Look at that police car. The image of a car being turned over and torched on the streets of Salt Lake City was appalling. We are better than that,” Brown said.

Before flipping the patrol car over, some protesters used skateboards and pipes to smash the vehicle, the affidavit says. The chief said he has since learned that someone sharpened the end of a pole and threw it at officers on Saturday.

“Anything that could be thrown, was,” he said.

Brown also learned that in addition to one of his officers being hit over his helmet with a baseball bat, another officer who was on the front line Saturday night — dressed it riot gear and maintaining crowd control — had his hand broken, but he continued to stand his ground.

“He stood out there for four hours with blood dripping out of his glove before he went over and said, ‘Hey, I think I need some help,’” the chief said.

Patton is one of the men seen in surveillance video “damaging the police vehicle by kicking the roof. (He) was also seen on video lighting the vehicle on fire using what appeared to be a substance,” according to the affidavit.

Charging documents add that Patton “appears to be throwing an unknown substance from what appears to be a canister into the patrol car, causing the flames to increase.”

Brad Engelbert, the assistant special agent in charge of the Salt Lake office of the Bureau of Alcohol, Tobacco, Firearms and Explosives, said investigators determined the destruction of the patrol car was “incendiary in nature,” or was intentionally set.

“When I saw the police car go up in flames, it hurt personally because we form a brotherhood in law enforcement,” he added.

Patton was arrested Tuesday after once again being in the downtown area and violating the city’s mandatory curfew, police say. Officers said they recognized him by his tattoos.

The burning of the police car was one of the most visible moments of Saturday’s protest. Huber and others said more arrests and charges are coming, and they condemned those who were in Salt Lake City only to cause trouble and not protest the death of George Floyd and police brutality.

“Outlaws and extremists hijacked what was supposed to be a lawful protest event,” Huber said. “On Saturday, whatever laudable message there may have been embedded in the goals of the protest, they were lost. Extremists and outlaws stripped that event of credibility and led it into anarchy.”

Huber promised “zero tolerance” for people who break federal law. If convicted, Patton and Newbin each face minimum-mandatory sentences of five years in federal prison, and possibly up to 20 years. Prosecutors filed a motion late Wednesday requesting Patton be held in custody pending his trial.

On Sunday, Connor Peebles, 21, turned himself in for his alleged role in flipping the patrol car over after Salt Lake police released surveillance photos of the people they were looking for. Because Peebles is not accused of setting it on fire, he will not face federal charges.

Peebles was formally charged Wednesday in state court with criminal mischief, a first-degree felony, and rioting, a third-degree felony. At least eight people were seen pushing the car over, according to charging documents. Because Peebles worked in conjunction with two or more people, he is also subject to enhanced penalties, the charges state.

At least two other people were arrested during protests in downtown Salt Lake City on Tuesday night in what was a much more peaceful demonstration than Saturday,

Taylor Phippen Adams, 31, was arrested for investigation of failing to disperse and violating curfew. Adams failed to leave the state Capitol grounds after being given a 30-minute notice that curfew was about to go into effect, and 15 minutes after the curfew began, according to a police affidavit.

“He informed (officers) he was not leaving and was then taken into custody,” the affidavit states.

Michael Robert Madsen, 32, was arrested for investigation of failing to disperse, intoxication and disorderly conduct. Madsen was also near the Capitol grounds, “yelling and screaming profanity,” a police affidavit says.

Commissioner of Public Safety Jess Anderson estimated that damage to the Utah State Capitol plus the cost of restoring parts of the granite walls will total more than $40,000.

“We do not take this lightly. We as a state of Utah stand together to come after those who want to cause harm and inflict violence and fear amongst the citizens of the state,” he said.

“There were folks that I know personally that were in the protest and they really just wanted to come down here and express their concerns about what they saw in Minneapolis. They are good people. And I really think this gives them a little more space that they can express their feelings and their emotions without the overwatch of a police department. I think it will be good,” he said.

The key, however, is for both sides to have faith in the other that laws won’t be broken or civil rights violated.

“We’ll be asking for trust. We’ve got to trust,” Brown said.