OGDEN — A 5-year-old Ogden boy who took the wheel of his family’s SUV earlier this month — heading down I-15 with $3 in his wallet and a plan to retrieve a Lamborghini in California — finally made it to the Golden State.

Adrian Zamarripa spent the past weekend in Beverly Hills, riding in luxury cars and hanging out with celebrity Jamie Foxx.

He is now back home in Ogden, where he’s grounded indefinitely, said his older sister Sidney Estrada. His family accepted the invitation from a luxury car dealer in California in order to foster his love of cars, on the condition that the dealer remain in the driver’s seat, she said.

“He was happy. Happy and surprised, but mostly happy,” Estrada said of her brother. The dealer, RD Whittington, took Adrian for spins in several luxury models before they pulled up to the home of Foxx, where the actor greeted Adrian with an elbow bump.

A beaming Adrian said he plans to someday work for RD Whittington, known as a car broker for celebrities, Estrada said. During their time together, the boy also spent time with Shaquille O’Neal and the rapper Lil Pump over FaceTime.

A shy Adrian declined an interview through his sister, who said he has long loved to ride a toy truck around their home, and sometimes could be seen backing up the miniature vehicle with a single hand on the wheel. He developed a love for sports cars through YouTube videos, she said. 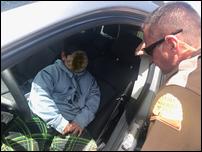 UHP: 5-year-old boy pulled over after trying to drive to California to buy a sports car

What was believed to be an impaired driver on I-15 Monday afternoon turned out to be a child trying to make his way to California to buy a Lamborghini sports car, authorities said.

On May 4, while his sister was napping, Adrian hit the road apparently headed for California with a plan to buy a Lamborghini and $3 in his pocket. A Utah Highway Patrol trooper spotted the swerving car and pulled it over, only to find a child behind the wheel, leaning back at a low angle in order to reach the pedals.

When the trooper began asking questions, he later recounted, the child began to cry.

He had made it about 2 miles without incident.

As Adrian’s parents try to craft the appropriate punishment, they are still trying to figure out what exactly was going through his mind when the child, who turns 6 next month, grabbed a set of keys, slipped out the door and put the family SUV in drive. But the boy has been tight-lipped, Estrada said.

Despite everything, he’s good, he’s healthy, he’s with us. He’s living his dream. We just hope that nobody else, no other family goes through something like this, because it is hard and it does affect us.

After his parents retrieved Adrian and brought him home safe, she recalled, the entire family wept. A day later, a local Lamborgini owner took him for a spin around the block. And the Weber County Attorney’s Office subsequently announced it had found no evidence of neglect and won’t be filing any charges against the parents.

“Despite everything, he’s good, he’s healthy, he’s with us. He’s living his dream. We just hope that nobody else, no other family goes through something like this, because it is hard and it does affect us,” Estrada said. “We’re just hoping we’ll heal from this. It was big and it was a traumatic event for us.”

Estrada and her mother, Beatriz Flores, said they hope the weekend in Beverly Hills will help fuel Adrian’s own dreams and ambition.

“All I’m hoping for is that he becomes very successful,” Estrada said. “That he works hard for everything he wants.”