How to run safely outside during the coronavirus pandemic

5PM: How to run safely outside during the coronavirus pandemic
Aley Davis, KSL TV

SALT LAKE CITY — For many, taking a run or walk outside is the only saving grace they have during this time of isolation. While it's important to get outside, it's also important to do it the right way. Health experts say there is proper running etiquette Utahns should follow to keep everyone safe on the trails.

Kim Herget has been missing her favorite running buddy recently. "When she was 4, she said that she wanted to start running with me," Herget said. Every year, she and her now 7-year-old niece Victoria run about five races together.

"She's so spunky, so much energy," Herget described of her niece.

But because of COVID-19, they are choosing to play it safe. They haven't been running together since the pandemic started.

Usually they prefer to run trails, like the Jordan River Parkway. "It's nice to be able to get out and see nature," Herget said.

But lately, Herget’s made a few adjustments to her regular running routine.

"I've definitely noticed an increase in foot traffic. People are just out walking," she explained. "So I figured it was too dangerous to go out and interact with people. I didn't want to be breathed on."

Instead Herget is opting to run neighborhood roads where she can cross the street more easily to avoid oncoming people. "Because it's easier to cross the street than it is to like get to the other side of Jordan River Parkway which is about six feet apart," she explained. 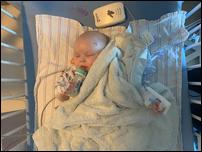 Utahns have been social distancing for a while now and new data suggests the time people have spent apart from one another is paying off. Experts say it's not only protecting the general public, but especially those with compromised immune systems.

Intermountain Healthcare's Julie Roberts, a nurse practitioner at the LiVe Well Center, is a runner herself.

"If you're sharing a trail with someone you have to step aside and let them pass," she explained. Roberts said it’s everyone’s responsibility to take precautions and encourages people to lead by example.

"You should be the one to maintain the social distancing and really curve wide," Roberts said.

Roberts says six feet is further than people might think. She measured the walking path at Liberty Park in Salt Lake City and found it to be exactly six feet, noting it’s challenging to share the pathway with a friend.

She said proper distancing while running is especially important, "because you are breathing heavier," Roberts explained, allowing germs to spread further.

"Be mindful of wind. Don't run right behind somebody," she warned, since the wind draft can also carry germs.

Roberts tells people to pack a mask just in case they find themselves in a position where they cannot avoid someone. "If you don't have it, you can't use it," she said.

Herget is also bringing a water bottle when she is out on a long run. "I don't want to stop at a drinking fountain that somebody else has drank from," Herget said.

Roberts noted many public water foundations and bathrooms are also closed during the pandemic and recommends that people plan accordingly.

She tells people to avoid touching crosswalk buttons and instead use their elbow. She also encourages people to head outside during less opportune times when there aren’t as many people out, whether that’s early in the morning or on a rainy day.

Perhaps most important, Roberts reminds people that although they should social distance, they can still go out of their way to wave and smile at other runners. "(These are) hard times and smiles are a great way to perk up someone's day," she said.

Although Herget misses running with her niece, she’s finding other ways to stay connected. "We've been waving at each other through windows and (FaceTiming)," she said.

And she knows they'll be able to run together again soon.

Roberts said if you are hitting the payment more often now, make sure your shoes are in good condition to prevent injuries. She also urges people to refrain from stepping into the road to create a six-foot barrier. She said it's not worth getting hit by a car.