MILLCREEK — Two people have been arrested in connection with the shooting death of man found on a porch in Millcreek on Monday.

Derek Algernon Little, 35, and his girlfriend Tryana Lynn Scaramella, 27, both of Millcreek, were arrested Monday evening. Little was booked into the Salt Lake County Jail for investigation of murder, obstruction, two counts of possession of a weapon by a restricted person, and possession of drug paraphernalia. Scaramella was arrested for investigation of obstruction of justice, according to police.

About 7:50 a.m. Monday, emergency dispatchers received a 911 call from a woman claiming she found a man on her porch, 229 E. Hill Ave. (4050 South), who might have been shot. Responding officers found Tevita Laloni, 32, of Salt Lake City, on the porch in extremely critical condition. He was taken to a local hospital where he died a short time later, according to a police affidavit.

The woman claimed she had just stepped outside her apartment and found the man. But as detectives began sorting through what happened, they learned that her apartment may be connected to the case, said Unified Police Sgt. Melody Gray.

“Officers were able to obtain video showing the complainant, identified as Tryana Scaramella by officers, was present while the deceased male was removed from her apartment and placed on the ground,” the affidavit states.

Little was also seen on the video “pulling the deceased male out of his apartment,” according to a police affidavit written for his arrest. 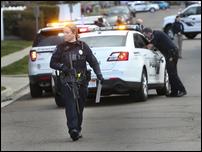 Unified police are investigating a fatal shooting that occurred in Millcreek Monday morning.

Detectives obtained a search warrant for the apartment and found “methamphetamine, a rifle, a shotgun, a loaded 9mm magazine, a spent 9mm cartridge, and hundreds of unfired rounds,” the affidavit states.

After he was arrested, Little told police that he was in a bedroom with Laloni when Laloni pulled out a loaded handgun, removed the magazine and tried to take the slide off the gun, according to the affidavit. He then allegedly handed the gun to Little.

Little stated that he did not want his son to see both parents get arrested so he left the scene and took his son to a friend’s house.

Police did not find Little until 12 hours after the shooting, Investigators continued to look Tuesday for another man who is believed to have also been present when the shooting occurred, and took the gun after Laloni was shot.