SALT LAKE CITY — A bill seeking $35 million meant to help increase Utah’s affordable housing stock has cleared its first legislative hurdle — but not without a senator airing grievances that not enough has been done to target zoning issues snarling developers’ efforts.

Sen. Jake Anderegg’s SB39 cleared the Senate Economic Development and Workforce Services Committee on Tuesday on a 2-1 vote. It now goes to the full Senate for consideration.

The bill, a product of yearslong efforts by the state’s Commission on Housing Affordability, is seeking a substantial infusion of one-time and ongoing money to help finance affordable housing projects, provide rental assistance and preserve Utah’s current affordable stock.

It’s seeking even more money than what was stripped from a bill last year that also enacted new policy to encourage cities to plan and zone for affordable housing.

The bill is estimated to help build about 2,300 affordable units and help between 3,000 and 4,000 Utahns in a rental assistance program, according to Anderegg, R-Lehi.

The bill easily found favor from Democrats on the committee, including Senate Minority Leader Karen Mayne, R-West Valley City, and Sen. Derek Kitchen, D-Salt Lake City, but the committee’s chairman, Sen. Dan McCay, R-Riverton, was frustrated by the bill and cast a no vote.

“I’m really struggling with this bill from a philosophical standpoint because I know the problems with zoning,” he said.

McCay, a developer, spoke of how he and his partners once tried to push through an affordable housing development, but the project died because of “Euclidean zoning.” He said there are fundamental flaws within local zoning that creates challenges for housing development, and throwing money won’t fix the underlying issues creating Utah’s housing crisis.

“As a result, now we’re trying to take money from Derek and give it to me,” McCay said. “And, to be honest, that doesn’t sit well with me, even though I would be the recipient of some of this money.” 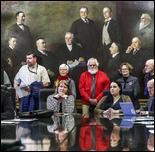 “Housing affordability is one of the greatest, unaddressed threats to the economic prosperity in Utah,” said Andi Beadles, executive director of the Weber Housing Authority.

Anderegg said he “didn’t disagree” with McCay and his concerns about zoning. He noted last year’s bill did begin efforts to encourage cities to be part of the solution, but acknowledged that some of the state’s Commission on Housing Affordability thought it “didn’t go nearly far enough.”

“But it was a really good first step to help move that aspect of it,” Anderegg said. “Our thought is last year was that side of the stick, and this year is the corresponding other side of the stick.”

Though SB39 is headed to the full Senate, it’s on shaky ground as far as winning its full $35 million fiscal note — or even a portion of it.

Legislative leaders have told KSL they are making no promises for affordable housing money — especially after the collapse of the tax reform plan. Until revenue numbers are released this month, lawmakers aren’t sure how much general fund money will be available to spend on affordable housing or any other priority.

Anderegg said it’s likely the bill will change as funding priorities are hashed out.

“Look, I get it,” Anderegg said. “We don’t have a lot of money to go around this year, and this is a very big request. I get it. This is going to have to go through several revisions as we figure it out.”