SALT LAKE CITY — Democratic presidential candidate Mike Bloomberg made a campaign stop in Utah Saturday, declaring himself the “un-Trump” and promising to bring his successes as New York City mayor to the White House to an enthusiastic crowd.

“I’m a problem solver, not a problem creator,” Bloomberg said, describing his style of leadership as much different than President Donald Trump’s. “I nurture good ideas. I hold myself accountable for results. ...I know how to unite people.”

He cited his record on gun control as well as climate change, and said he’s running for president because he sees the country being torn apart.

“We can do better,” Bloomberg said during a nearly 20-minute speech punctuated by applause and even an ‘Amen.’

Several hundred people crowded into Impact Hub, a downtown co-working space, to hear Bloomberg, the first presidential candidate to make an appearance in Utah this year in advance of the state’s Super Tuesday presidential primary on March 3.

Bloomberg is already spending big money in Utah on TV commercials that have been airing since his entry into the race last November, and now, on a Utah campaign office that’s expected to grow to as many as 20 people in several locations around the state.

“It is so wonderful to have a candidate that is putting real resources into the state of Utah,” said Lauren Littlefield, state director of the Mike Bloomberg 2020 Utah campaign and a former Utah Democratic Party executive director. “Mike Bloomberg is making a commitment to Utah, and Mike is a doer, not a talker.” 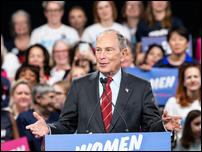 Democratic presidential candidate Mike Bloomberg will be in Utah Saturday to hold a campaign event that’s open to the public.

“We believe Mike Bloomberg is the alternative to Donald Trump Utahns can get behind. We plan to run an aggressive field campaign,” Littlefield said, to get as many Utah voters as possible “excited and ready to support Bloomberg on March 3.”

The push in Utah is part of Bloomberg’s national Super Tuesday strategy. Instead of campaigning in the first four states to vote in the presidential primaries — Iowa, New Hampshire, South Carolina and Nevada — he is pouring hundreds of millions of dollars into the more than a dozen states holding elections March 3.

This election, Democrats in Utah as well as the rest of the country face finding a candidate who can take on Trump, who is running for a second term after being impeached in the House for abuse of power and obstruction of Congress in connection with having sought political favors from a Ukrainian leader.

Scott Howell, a former Democratic Utah Senate leader, is supporting former Vice President Joe Biden for president but said either Biden or Bloomberg “present the very best opportunity to take back the White House.” He said beating Trump is what Utah Democrats should be thinking about when they make their primary election pick.

“We can all cast a vote for someone we all feel good about emotionally, but then reality hits. Utahns know fiscal responsibility,” Howell said, and understand that promises made by Sanders, Massachusetts Sen. Elizabeth Warren and other progressive candidates about a single-payer health care system and free college won’t work.

Before Saturday’s event, Bloomberg met privately with a group of community and political leaders. He arrived in the state mid-afternoon from California, and was headed to Tusla, Oklahoma, after doing interviews with Utah media.

Other presidential campaigns have been sending surrogates to the state, including Biden’s wife, Jill, who appeared at a fundraiser at the University of Utah’s law school earlier this month. Chasten Buttigieg, the husband of candidate Pete Buttigieg, is holding an event in Utah on Jan. 23.