SALT LAKE CITY — The highly popular fireplace or wood stove conversion program will begin again early next year, with the Utah Department of Environmental Quality establishing a staggered registration schedule for eligible households along the Wasatch Front and in Cache Valley.

Last year, state air quality regulators did a bulk registration and eclipsed the $2.7 million in available funding in just 12 hours.

“We were shocked when we came in that first day and found out we had oversold,” said Joel Karmazyn, an environmental scientist with the department’s Division of Air Quality. “We don’t do that anymore.”

The program last year involved 1,800 projects in which the majority of households converted fireplaces to natural gas. Some wood stoves were also converted to the cleaner burning fuel.

Instead, each specific area of nonattainment has been given a registration timeframe for residents to start the first steps to change out a wood-burning stove or fireplace for natural gas or propane appliances. Registration begins on varying dates for all six counties, with most starting in January. Registrations continue over a multiple month period, with some extending into August.

Regulators set up a website to help guide people through the process.

Only those households in eligible areas should apply, and there is a limit of one per household.

The program, because of its popularity, is an administrative challenge for the division given the amount of vetting, oversight of the process — which has a 100-day timeline from eligibility determination to installation — and ensuring vendors scrap the wood-burning stoves. Karmazyn said there are strict requirements imposed by the EPA.

Registrations are being staggered due to vendor capacity.

“It doesn’t make sense to have 100 awards in Box Elder County when there is just one vendor,” Karmazyn said. 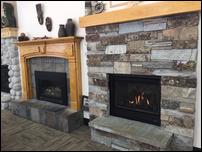 If you live in northern Utah, chances are your furnace kicked on after below-freezing temperatures overnight — or you had to stoke the fire in your wood-burning stove.

Karmzyn said the reimbursement comes from two separate pots of money, federal dollars that are pass-through from the EPA aimed at Utah County and Cache Valley, and state money appropriated through legislation passed in 2019 for other nonattainment areas.

The vetting process gets bogged down due to ineligible applicants — even people from out of state have applied for funding, Karmazyn said.

Wood smoke contributes to fine particulate pollution in Utah that is particularly problematic when inversions set in.

Karmazyn said it’s estimated that during those times — when people shouldn’t be burning — wood smoke still contributes to 14% of area emissions.

At one point, advocacy groups were pushing for an all-out ban on the burning of solid fuels, but that effort was upended by the Utah Legislature.