Ayoola Ajayi, 31, who was identified as a person of interest in the case, was arrested on June 28 after police confirmed DNA evidence was found at his home.

Felony charges were filed against Ajayi on July 10 for criminal homicide/aggravated murder, aggravated kidnapping, obstruction of justice and the abuse or desecration of a human body in connection to Lueck’s murder.

Gill sat down with KSL Investigator Brittany Glas in a one-on-one interview to discuss the case, its standing and what friends and family of Lueck should expect as they seek justice for their loved one’s death.

When asked about the process behind prosecuting a high-profile, complicated case like the one against Ajayi, Gill said, “First of all, it takes a lot of resources. There’s a lot of different partners that have come into play. You start with information in the community, you have a law enforcement agency that gets involved. They have a process to gather the information, then there’s a nexus that develops between that law enforcement agency and the district attorney’s office.”

Gill said he remembers learning about Lueck’s case early in the investigation – when it was a missing person’s case — and speaking with Salt Lake City Police Chief Mike Brown.

“I reached out to Chief Mike Brown to make sure that he was aware of it,” Gill said. “He was. He and I coordinated just to see what that process was.”

After Lueck arrived at Salt Lake City International Airport in the early morning hours of June 17 following a family member’s funeral in her home state of California, she took a Lyft ride to North Salt Lake’s Hatch Park. She was dropped off at the park around 3 a.m. Then, she vanished.

Lueck missed a test and then a flight home the following weekend. Lueck’s friends were worried about her safety and quickly began getting the word out that she was missing.

It soon became clear that Lueck was dead. She had been murdered.

“[Mackenzie] has incredible parents,” Gill said. “You see, on a personal level, what a loss of a loved one does — what that grieving process is like and it, emotionally, is devastating.” 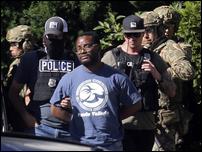 When Lueck’s remains were found on July 3 in Logan Canyon, Gill said he was thinking about Lueck’s parents.

“The immediate thought that came to my mind was that at least for them, this might help with some of the closure that they need to do,” Gill said. “And then of course, as a prosecutor, we also knew what the value of that, what were we going to learn from that. So, that was an important part of this whole process.”

Gill said he then knew Lueck’s remains would provide necessary evidence, allegedly tying her more directly to Ajayi. However, a potential trial date has not yet been determined.

“We have this perception that from TV and movies and whatnot, that this is something that happens in a very quick timeline,” he said. “The more complicated a case, the longer that process is sometimes because everybody is trying to make sure that they’re doing it right and that you’re crossing every ‘t’ and dotting every ‘i.’ We have to gather the information. We have to gather it in the right way. We have to document that information in a right way. So that it’s evidence — potential evidence — that is ultimately admissible.”

Gill said prosecutors will only have one chance to try the case against Ajayi, making it even more crucial that the process is not rushed.

“In complex cases like this and in general, you may get additional reaching from the community, you may get additional calls, and you may get new leads, and we have an obligation to process that,” Gill said. “We have to process the information that we’ve gathered, we have to respond to any new inquiries that may come in. We have to break down scientific or digital evidence. That sometimes takes time. That’s an ongoing process that we’re engaged in. Very rarely do these cases come to an end at the moment that you file.”

Gill did not speculate if and when a plea deal could become an option in this case, nor did he say if or when his office could decide whether to seek the death penalty.

“People can rest assured that I have a team of very good dedicated prosecutors — both our investigators, as well as the Salt Lake City Police Department,” he said. “Everybody is working on this case. It’s a priority case for that team and so, we want to move it along in a timely fashion. But we also want to move it along to make sure that we do it right. Everybody’s rights are protected and it’s a fair process. Justice is a very defining component of our process, and justice is something we pursue, and we try to find some measure of it for victims and families who have undergone some really heinous and tragic experiences.”

Gill said anytime someone’s life is taken it’s important and it has an impact in the community. Every case is tragic.

“Whether it’s a case like this or a whole host of cases that our office handles, when you have victims — when there are personal injuries that are suffered upon them — from law enforcement, from prosecutors, that you can’t help but be impacted and affected by that,” Gill said. “There are a lot of cases that our office deals with, that have tragic outcomes and it leaves an impact on those families and those loved ones for years to come. So, they’re all important cases… they’re all important to us.”

Ajayi currently faces 27 total counts of various charges filed by the Salt Lake County District Attorney’s Office. They include the four counts mentioned above, 19 counts of sexual exploitation of a minor after child pornography was allegedly found on Ajayi’s computer after his arrest, and four counts related to a separate kidnapping case dating back to March 2018.

The victim came forward after Ajayi’s arrest. The charges — one count of aggravated kidnapping and three counts of forcible sexual abuse — were filed in August.

“Of course you don’t wish that there are any more victims out there, but if there are, then we would be derelict in our duty to not respond to those if that information comes forward to us,” Gill said.

Ajayi is currently booked into the Salt Lake County Jail without bail.

Chief Mike Brown said Ajayi denied any personal contact and told investigators he didn’t know what Lueck looked like, despite police finding having several photos of her in his possession.

Ajayi is presumed innocent until proven guilty. He has a scheduling conference set for October 7 in court.