SALT LAKE CITY — It doesn't take much to change someone's life. Whether you're a paramedic or a football fanatic, anyone can make the world a better place.

The KSL.com "Make Your Week" column features uplifting stories sent in from people outside the newsroom. In this edition, many people recognize "the henchman" at University of Utah games, but what they don't know is the work he does when he's not wearing face paint. And a group of paramedics made a surprise special delivery.

The man behind the paint

"I work with a great guy by the name of Johnny . . . who is known as the henchman at the U of U football games," said Anna. "He has been doing it for years. He is a big U of U fan. He bleeds Utah Utes. He dresses up for every game in his shoulder pads, paints his face red with a big black U and he is ready to go."

"What people don't know about him, is that he is one of the most giving guys I know. On top of always putting others first in almost every way, he is and has been for quite some time, extremely involved with the 'Make a Wish' foundation. He has been involved in making kids wish come true. He organizes and dedicating his time and finances to make these dreams come true."

"I've known Johnny for more than 15 years," said friend and coworker Davis. "He is a die-hard Ute football fan. Among all my friends and family, Johnny has one of the biggest heart of any. His friends and peers are all family to him and he more than shows it in his actions. You can ask any of the thousand of people in his network and all will say the same thing. He is the most selfless, considerate and giving person they know. He may have only one hour, but you can bet you'll get two. It wouldn't matter if you're deserted 1,000 miles away, you can rest assure Johnny will be there. This is speaking from experience on several occasions."

"Invite him to a function and you can bet that he will be the last one there helping. Whether he is officiating weddings, coaching five years ago flag football teams, or giving a child a wish of a lifetime, you will find Johnny exhausting himself without any regard for himself just to ensure people around him are taken care of. If you call him a friend you can bet he'll treat you like family. There is no one I trust more or believe in than Johnny. I couldn't say enough about him. He is the true definition of a great human."

Some local firefighters helped with a special delivery by bringing a little boy into the world.

"Recently Weber Fire District was called to the North Fork area in the upper valley for a pregnancy emergency," read a Utah State Firefighters Facebook post. "Medical/Fire crews arrived and assisted with the delivery of a healthy baby boy while en route to the hospital."

"Crews reunited with the family to present them with some gifts for their new addition." 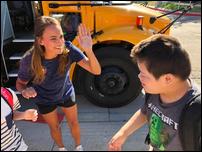 Make Your Week: Back to School

Back to school season is upon us and kids — and cats, apparently — are reaching new heights.
×