BOUNTIFUL — The Gun Range Fire that caused hundreds of families to evacuate their homes is now 100% contained, officials said Sunday.

A full containment, South Davis Metro Fire said in a Facebook post, means the "entire perimeter of the fire is contained." Although the 321-acre area is fully contained, officials said residents should not be alarmed if they still see some smoke coming from the burn area.

"There is a significant amount of ash on the mountain as well," the post read. "Until we get rain to wet it down, you may see dust or smoke as the winds blow the ash around."

The area may also continue to smell like smoke, which the fire department says is normal until rains wet the mountain.

The Forest Service will continue to evaluate the burn area to determine if there is any risk of mudslides.

"Their initial report is that the fire did not burn deep enough into the earth for this to be an issue, but they will give us an updated report once their teams have completed their evaluation," the fire department said.

The Gun Range Fire burned three Bountiful homes and damaged eight others, but no injuries were reported. Approximately 400 residents were evacuated from their home early Friday morning. The evacuation order was later lifted Saturday morning.

Officials said Friday the fire was human-caused and likely by a campfire near the Bountiful "B." Police said they were looking for two individuals in a small SUV in connection with the fire. 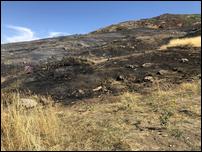 All evacuation orders stemming from the Gun Range Fire were lifted at 11 a.m. Saturday, officials said, allowing Bountiful residents to return to their homes after more than a day.
×